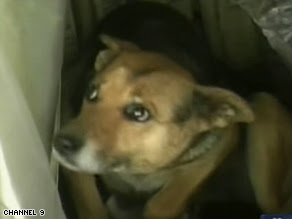 (CNN) -- A dog sheltered a newborn baby abandoned by its 14-year-old mother in a field in rural Argentina until the boy was rescued, a doctor said Friday.
A resident of a rural area outside La Plata called police late Wednesday night to say that he had heard the baby crying in a field behind his house. The man went outside and found the infant lying beside the dog and its six newborn puppies, said Daniel Salcedo, chief of police of the Province of Buenos Aires. The temperature was a chilly 37 degrees, Salcedo said. The dog had apparently carried the baby 50 meters from where his mother had abandoned him to where the puppies were huddled, police said. "She took it like a puppy and rescued it," Salcedo said. "The doctors told us if she hadn't done this, he would have died.

"The dog is a hero to us."
Dr. Egidio Melia, director of the Melchor Romero Hospital in La Plata, said police showed up at the hospital at 11:30 p.m. Wednesday with the baby, who doctors say was only a few hours old. Though the infant had superficial scratches and
bruises and was bleeding from his mouth, he was in good shape, Melia said. The next morning, the child's mother was driven by a neighbor to the hospital and told authorities that the 8-pound, 13-ounce infant is hers, Melia said. The teenager was immediately given psychological treatment and was hospitalized, he said. She has said little about the incident.
The child has been transferred to a children's hospital in La Plata, 37 miles from Buenos Aires 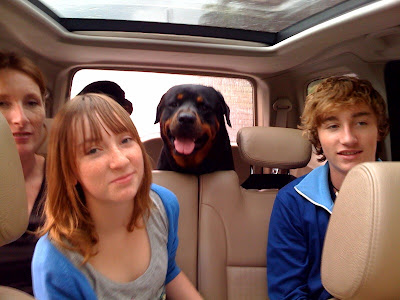 How rare it is nowadays to have someone report a heart warming story like that. Dogs have always been the first to understand and PROVE unconditional love. And even across species. The dog had her own pups to take care of, and she dragged the infant 50m back to her little den to make sure the infant doesn't die. Later on, we had a fun day with Pa's guest... we went to the Doggie show at the Expo! 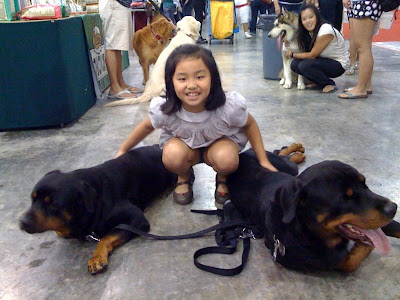 We had all sorts of people wanting to meet us, yet rather fearful. We even met readers of our blog site! WOW! Please leave a comment guys... we would really love to get to know all of you more. Little girls like this one had absolutely no fear... and she really wanted to take pictures of us! I hope she visits our site here soon! Also check out MOMO and his Mommy (the little green eyed monster) in the background! 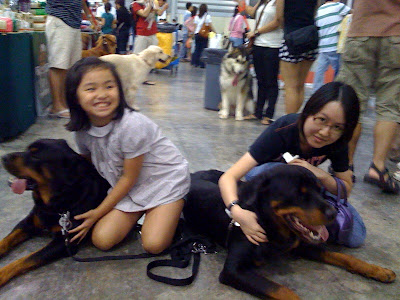 Others took one look and simply decided that having her just take pictures with us isn't enough! they just joined in! Hey... I enjoy being caressed by pretty females of ANY species. Unconditional Love BABY! 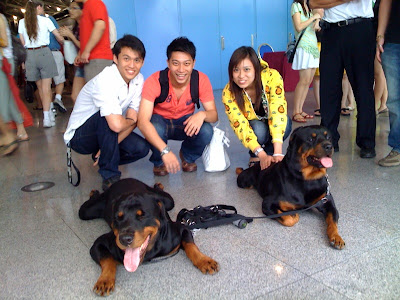 Oh yeah... Pa is kinda jealous why no one puts their hands on his ass like this girl here. I told him simply that he just ain't got the charm! One thing Pa's guests remarked is that in France, people aren't very wary like us Singaporeans here. People simply doesn't run away screaming. I also noticed that when Bruno and I walked, people kept out of the way. But when we stopped, the excitment level grows and then everyone just wants a piece of Bear Bear's Ass. Make up your minds humans. if i wanted to br a Bad Dog, whether I move or not isn't really an issue. Doesn't mean that I can be less ferocious when I'm lying down. Oh well, Big Boys like us are rarer i suppose. 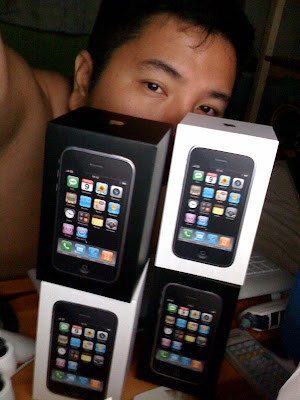 All these new photos were taken by Pa's new toy. Apparently he seems to have bought quite a few... Would you like one? According to Pa, its not as pretty as me, but it came damn well close.

Bah. Whatever. I might not be able to open the door for him, but lets see if an intruder can just carry me away in his pocket. Size matters.
at 3:33 AM

I was one of the pretty girls who met and patted bruno and bearbear! :) lol

they're both such sweethearts.
-d.

which one were you? can you guys like leave names and stuff? Pa really cannot remember you guys if its always Anonymous!

Sexy baby there... with the iphone. :P