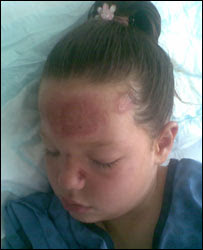 Girl, six, mauled by rottweillers
A six-year-old London girl has undergone plastic surgery after being mauled by two rottweillers at holiday accommodation in County Antrim.

Sophia Kimpton suffered 17 injuries to her head, arms and back during the incident at Conagher self-catering chalets, on a working farm in Dervock.

Her mother fought off the dogs which were later shot by the farmer. The chalet owner refused to comment.

The Tourist Board has suspended the tourism classification of the business.

It said it was investigating the incident.

Sophia underwent plastic surgery to repair her ears at the Ulster Hospital in Dundonald. She also has lacerations and puncture wounds.

Her mother, Natasha Beckett, said she thought her daughter was going to die during Tuesday's attack.

"They were attacking her like a bit of meat, eating her and biting her," she said. 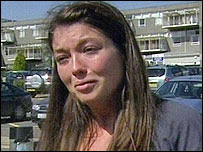 "They were horrifically big. We were yelling to get them off and they were not budging. My husband was kicking one of them, I was kicking the other one off. They were just attached to her head.

"I used myself as a human shield. The blood was just pouring out of her.

Natasha said her child rolled herself onto her front, which saved her face.

She asked if the Northern Ireland Tourist Board, who approved the family accommodation, was aware that the owner kept dogs.

"This was advertised as a family home and you do not expect any dogs of that kind to be on a working farm, where there is children," she said.

The Northern Ireland Tourist Board said it was shocked to learn of the attack.

It said it had spoken to the family and offered support through the Tourist Board's victim support fund.

"A code of conduct exists in relation to the promotion and advertising of all tourist accommodation," it said.

Caroline Adams of the Northern Ireland Tourist Board said they could not close down the business.

"The legal responsibility is with the operators and it can never be us as marketing agents and inspectors," she said.

"So therefore we need to be more specific and ask people to sign up to what they promised to undertake, not just for inspection but all year round," she said.

Provoked or not, the dogs should have been better managed.

Rotties or not, this could have happened to any breed of dogs.

Unfortunately...once again... The Rottie name is being dragged through the mud. Not only is a little girl badly hurt, but two dogs lost their lives over irresponsible ownership.

1. The two dogs are kept together since young or together most of the time.

Mistake 1: Dogs kept together (2 and above) tends to form a pack.
If the owner isn't a part of this pack, then the pack is dangerous as the Dogs would only follow the pack leader who in turns follows the owner as far as it wants to.

Solution: Never keep dogs together. Its ok to let them socialise and play. But not left unsupervised the whole day together, Food to be fed separately, and the dogs to sleep separately.

2. The two dogs were confined to a certain location and rarely let out or socialised with other people, dogs or animals.

Mistake 2: When dogs are confined to a particular location, that becomes their entire world. Like teachers in a school, some lose sight of the bigger world beyond the school (no offense to any teachers here). Dogs are similar. That little plot of land is your whole world. And suddenly, an unfamiliar sight and smell enters your world.

What can you do but defend what little you have? The girl must have seen the dogs and wondered into the area they were confined in.

Solution: To bring the dogs out more often, socialize them well and let them see that there is a much bigger world out there. Training your dogs with various other people will enable them to learn what is considered acceptable behavior. Dogs and kids should be supervised all the time.

Mistake 3: Kids like to aggravate strange dogs to have a reaction from them. eg. mock barking.

Solution: General Education to everyone on dog-keeping would lessen this sort of attacks on persons.

Pa also came across this Blog about Media and Dogs...


Like the Singh article a few days ago, where they kept 5 rotties together... they are doing almost everything wrong.

They allow the rotties to form a pack without them, indiscriminately breed them without doing a proper hip score, never let them out to socialise...and hence they actually "escape" the compound every once in a while.

That too is an accident waiting to happen. 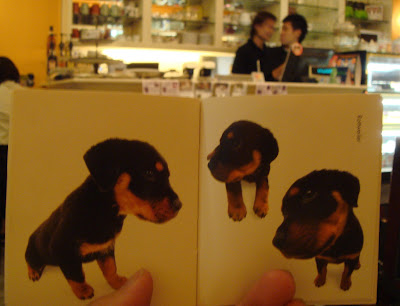 Like your pa said...any dog big or small can attack. It's just that the newspaper always like to sensationalise big dogs attack more.

Mummy remember when she was in school , her neighbour kept a GSD but it was always locked up in the kennel. One day the lock sprung open and the dog just went crazy running round and round the yard! Eventually, the owners came back and got the dog back into the kennel again...but the weird thing is a few days later the dog died..being poisoned...not by the owners but get this...thieves!! Cuz...another few days later, there was a break-in, three houses in a row kenar...mummy's included. Just plain weird...

Anyways...the moral of the story is, do the best to socialise your dog, give lotsa exercise and give lots and lotsa of treats (mummy: you sure you got the last one correct? *roll eyes*)

yeah im a dog lover and i completely agree with you. it makes me sad to know that dogs are put down because of it's owner's fault. Esp when it comes to rotties, i feel that potential dog owners should read up and talk to experienced dog owners before making the commitment.

Also, firm training is very important for such breeds. ANY dog bites when provoked but attacks from dogs of agressive nature are always sensationalized by the media.

My friend owns a rottie and the dog is very well trained n socialized! the dog is very relaxed even when kids are running around him and hugging him. He even knows to be gentle with kids....he just lies there for them to pat.

what's worse is people telling me I got to be strong physically to own a rottie or GSD! That is completely wrong! As their leader, I should be able to control and gain their respect through firm training. The dogs should be able to heed my commands willingly instead of needing me to pull and tug at them physically! It's all psychological - they gotta' see me as their pack leader! people don't understand that!