Big Shocker yesterday... I was "officially" complained upon! The Mods have taken down the postings which i think is the right thing to do. Cause Jojo had really nothing to do with it and it was her adoption thread.
The Exchange between Fluffy and Bear Bear...

Fluffy: before you want to help other dogs. control your dogs properly first. yours are big dogs, rotts.. trying to attack me and my dogs. i ask you to pull back your dogs, and you never did it. i read you kept got dogs for fostering, adoption. i'm angry over this matter. you should be a good owner first before you want to help other dogs. and you never even say sorry to me.

Bear Bear: Hi fluffy, there definitely some sort of misunderstanding here. If my dogs caused u any pain or suffering, allow me to apologize right now. Those that know me and bear + Bruno will know that isn't what we want.

1. Unfortunately I do not recall this episode, maybe it was crowded. Please kindly refresh my memory.
2. Maybe they might have been a bit happy to meet u and your dog. "Attacked" is such a strong term. Cause I think if they did, then I doubt u would only be merely "angry". I think the term "injured" or "decapicitated" would be more accurate.
3. Helping another dog to get a new home has probably nothing to do with whether I have big or small dogs, well behaved or not, or even whether I do have a dog. I mean I need not help the mentally handicapped unless I have a family member that's suffering from that right?

Finally, this is to rehome a dog. If u have something u would like me to take notice or complain, feel free to pm me and even date me out for dinner. And then complain to my very willing ears + a counter argument why u are probably wrong.

Fluffy: why would i want to date you out for dinner! you go and recall. SMU.

Bear Bear: Of ALL the things in that entire chunk I wrote, all you could focus on is THAT?

Well, if you want to be rude about a sincere apology, then obviously you do not have the class to accept one.

Perhaps next time you will have the "good" sense to run far far away when you do see Bear and Bruno, just in case they "ättack" you again and make you "ängry".

PS> SMU is suppose to be the Uni Bear and Bruno attacked you or some insulting acronym?

Fluffy: the thing is not i insulting. your rott did attack me n my dog. i was carrying my dog. i try to push away your dog, and told you to push away. but you did nothing. the person beside you help you to push your dog away from me. you are lucky that my dog is not hurt. if she is hurt in anyway, this will not be a simple matter already. 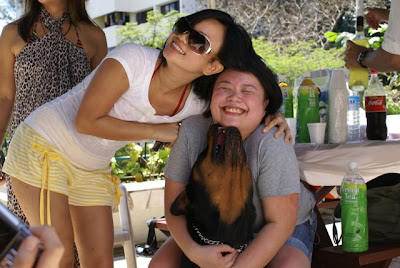 Do you UNDERSTAND the term "attack"?

1. to set upon in a forceful, violent, hostile, or aggressive way, with or without a weapon; begin fighting with: He attacked him with his bare hands.

If my dogs "attacked" you, trust me... you can neither "push" them away, or would ANYONE else except me would be able to.

If its was such an attack, was I standing to one side laughing?

I think I have been more than cordial answering your accusations. Your story unfortunately does not add up. This thread is about rehoming Jojo. So if you have anything to add, just PM me or start a new thread about the definition of an Rottweiler attack.

I have been very careful about my dogs and I think many that have met them would agree that they are not capable of what you are saying here.

However, if your definition of attack = sniffing your dog's but as well as yours, then YEAH... My rotties "attack" everyone that comes within reach. SO stay far away next time. It is dog owners like yourself that aren't socialised enough and give the rest of us a bad name.

And then the Mod stepped in to delete the entire exchange.

If Fluffy does come over here... then this message is for you.

I hope you will get to understand dogs a little better. I have been working very hard to clear the issues surrounding my breed. I understand that you might be a little scared of me and think that what I did was an "attack" on your poor doggie. Really it isn't.

This is simply how dogs meet and greet one another. If you carry up your dog, then your dog's butt is just simply a bit higher... which I can still reach when I stand a little closer. 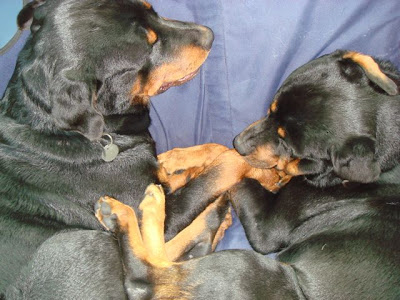 remember people... if you want your dog socialised, then do not carry your dog up when meeting a bigger dog. Or act all scared or run away on sight. This anxiety is transferred to your dog as well. Your dog then learns that this is the correct thing to do when facing a bigger dog. if you have any questions about socialising your dog, just post them here and I will do my darnest best to answer it right as far as I know.

What is SMU mentioned in Fluffy's entry? issit an insult or telling me where the "attack" took place?

On an another note... Pa has once again disappeared to eat good stuff without me. Uncle John only invited him and NOT ME.

Beery, beery good
IT was on a lazy Saturday afternoon that I took our panel of judges to Oosters, a Belgian brasserie for good food and good beers.
By Yvonne Phoo
27 August 2008 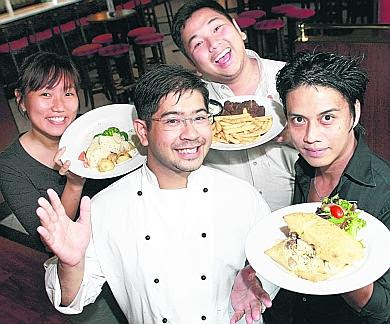 IT was on a lazy Saturday afternoon that I took our panel of judges to Oosters, a Belgian brasserie for good food and good beers.

The menu boasted Belgium authencity with the words 'Welkom in Oosters!'.

Glad that it was a non-work day, the panel kick-started the food-tasting session by ordering ales from a selection of 25 imported Belgian beers.

Ms Kris Yew, 28, a nurse at United World College settled for the popular Hoegaarden available on tap while the men chose the bitter and heavier dark ales.

Coming from a country that produces 400 beers, Belgians take pride in beer-pairing, rather than the usual wine-pairing for other cuisines.

Head chef Iskander Latiff, 26, is responsible for the brasserie's menu. A former head chef at Muse, he said that he joined Oosters to 'perfect the mussels'. 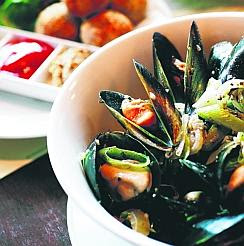 If you find yourself in doubt on how to make the best out your meal, not to worry. The helpful menu suggests which type of beer goes best with the food you order.

Everyone voted the Hoegaarden cod the star of the meal. Mr TK Haw, 31, director of Aqua Bridge International, said he would go back to Oosters just for this cod served with a Hoegaarden-infused cream sauce.

'The fish is springy, and unlike most cod dishes where the meat breaks apart, this one doesn't,' he said. 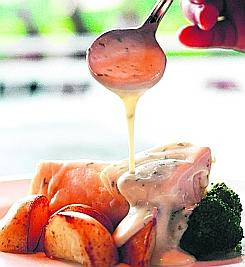 On a whole, I noticed that it was the Belgian beers that the panel seemed to love the most as our glasses were getting refilled faster than the food disappeared!

Mr Haw felt that there should be some variety, instead of serving just fries with every dish. I also had to agree with Mr Kevin John, 34, a former F&B manager at a fine dining restaurant, that the service was poor.

It was difficult to get the attention of the service staff as most of them seemed to be distracted with a dance competition being held outside.

Meow.... Ermm i would say i truly admire the way you are handling the complain issues & the way you presenting yourself....

Btw, Bear Bear is ur rottie's name and yours? Should i address you as bear bear as well?? lols....

I may be a cat woman but i love dogs as well... I love big dogs especially... Should i have a landed property in the near further with a compound, i would love to get a German or maybe Lab? lols....

Thanks for helping the needy and may God bless you...

Thank you for your compliment...

And please... get a Rottie. We are WAY cuter.

whatever i can get from the shelter... All my cats are strays and i sincerely prefer to adopt unwanted pets by giving them a chance to live... So whether i still have hopes in getting my dream dog, we shall see.... I wouldn't mind a rottie at all, just that i have no experience in handling dogs.... Will rottie my kitties get along?

Rotties and Kitties get along just fine. You can look through the past entires... there are some with me and Kitties.

I think Fluffy is NUTS! I know your dogs would not do such a thing. You know that I'm a person who HATES to see owners carrying their dogs & acting silly when another big dog comes forward to greet his/her dog. Feel like slapping the owner! I hope she/he reads my comment...

Oh man, it's just another senseless case of an under-socialized dog owner. Yes, it's the owner.

Grrrrr....arf! Bear and Bruno are such gentleman dogs who fostered me. Now I'm the kinda small dog that loves to attack other dogs. Let me have that dog for lunch!

I have meet Bear Bear and Bruno before - they are gentlemen, yes a bit playful but not "attacky" or dangerous.

Let's give Rotties a chance, doesn't mean they are big, they will kill senselessly.

Bear Bear/Bruno, forget about Fluffy, most likely she's jealous of you and your pa.

I dun have to meet you guys face to face (jus read ya blog) to know that you are two of the most well-behaved rottweilers i have ever come across.. and i have to say you have a great master aka pa. ya pictures also said a thousand words of how well-mannered you are.

If one has the misconception of gigantic dogs for being dangerous and love-to-attack and wun change their mindset, then one will never experience the beautiful side of big dogs.

I only have one explanation for fluffy owner's behaviour: a poorly behaved dog is a reflection of the owner.

Can recommend any singapore based dog forum? Want to read up more about dog care. Thanks!

I am no expert in Doggie Forums...Well, because I usually get kicked out of them.

But some do get used to me and eventually i do not get misunderstood.

Pet Lovers isn't too bad, though I am banned.

Doggiesite can get quite catty.

You can try Dogs Forum and Pawzcafe.com