Someone left a link on my little cbox which I really hope is a true story. We hadn't had a story like that for a long time. Just wish I knew if it were a real story... I couldn't varify it at all. No pictures as well. If you have any information whether this story is true, Please... let me know.

Not that I have no faith that this story is true, us rotties are more than capable of everything that was described.

Kathie Vaughan was driving the used truck she had purchased that morning when it suddenly began to fishtail. She finally managed to bring the vehicle to a stop with a loud screech. But her troubles had just begun. The cabin interior was filling fast with noxious fumes and black smoke. Most people could have simply jumped out of the vehicle, but Kathie is a paraplegic–paralyzed from the waist down by multiple sclerosis. Her truck was on fire and she knew she could be blown up at any moment. Kathie shoved her Rottweiler Eve out the door, along with her wheelchair. But due to the thick black smoke, she could not find the wheels to the chair.
A throbbing panic overwhelmed her. She had to get out immediately, before the truck exploded.

That’s when Eve, her dog, proved herself to be a true hero.

In danger of blacking out, Kathie suddenly felt Eve, refusing to desert her, grab her leg with her jaws. Eve firmly grasped Kathie by the ankle and dragged her ten feet to relative safety. Then the truck burst into flames. Ignoring the terrifying fire, Eve dragged Kathie to a nearby ditch.
A police car arrived on the scene. “You’ve got to get further away!” the policeman shouted to Kathie. The truck was on fire, the flames were approaching the gas tank; there was danger of a terrific explosion. Kathie struggled to pull herself away from the truck and toward the police car. Her head and body ached with pain and she found she could hardly move. Eve bent close to her human friend, offering Kathie her collar. Then Kathie held tight as the determined dog dragged her forty feet to safety.
The firemen eventually extinguished the blaze.

And Eve was awarded the prestigious Stillman Award for bravery.
Also found a reference here...

Since we are all on good vibes today... Pa has always been a crazy fan of a local band called EIC. Recently they released their first ever original album and though a little rough round the edges, its exactly how Pa likes it. I just wish I could go and listen to it with him one day. 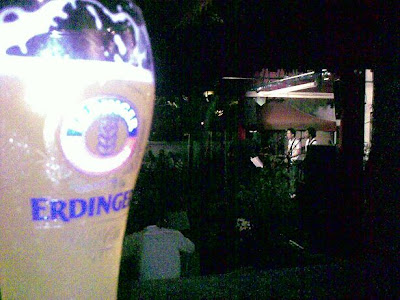 Here's a little video clip that has a pretty decent version of their hit song. You guys should just support them and go buy the CD. There is going to be a launch this coming Sunday 24th August 2008 at HMV. If you guys can make it, go on down and meet them! I will try my darnest best to go take a picture with them!
As an after thought... one of the things that probably turns Pa on is the Guitar playing... He really likes the electric... but trained in the classical form instead... so he ever gets so envious when he does ever listen to good guitar playing.
And BOY can this girl play. For some odd reason also, he finds her damn familiar. Not that he ever heard this girl play or met her before... just the flair and well... legs... dressing... Sure wished he tried to hear her play.
at 3:01 AM

Think the hero story is true. It's one of many mentioned at http://www.dogguide.net/25-hero-dogs.php. I'm glad to see small dogs like me can be heroes too :)

If I hadn't know your pa personally, I would have think that he's a pervert from the video he took of the eletric guitar rocker chick. He just took a clip of her legs!!!! like some psycho obssessed with women's legs and would chop them off and preserve them as trophys!!!