Dogs have a sense of right and wrong/ Professional USDAA Pics

Dogs have a sense of right and wrong
By Roger Highfield, Science Editor

Dogs have become more intelligent, and even learnt a sense of right and wrong, through spending time with humans, a study shows.
Although still controversial, recent research is beginning to support the view that an owner is perfectly correct when they pat their pet and coo "who's a clever boy then?"

Because of the way owners have selected smarter and more empathic dogs down the generations, these pets now appear to have a limited "theory of mind", the capacity that enables us to understand the desires, motivations and intentions of others, New Scientist reports today.

A decade ago, most scientists would dismiss the claims of dog owners that their precious pets could experience pain, excitement and other "human emotions" as sentimental claptrap that anthropomorphises the abilities of animals.

Now that dismissive view has been challenged by studies presented a few weeks ago at the first Canine Science Forum in Budapest, Hungary, which back the idea that the 10,000 years that the descendants of grey wolves have spent evolving alongside humans have had a remarkable effect on dog cognition.

In a remarkable experiment to probe canine cognition, Prof Ludwig Huber and colleagues at the University of Vienna put dogs through a classic experiment done with children in which an instructor demonstrates to a toddler how to turn off a light using her forehead, once with her hands clearly visible and once when wrapped in a shawl, so that she can't use them.

When invited to turn the light off for themselves, toddlers who were shown the first version use their heads, but those shown the second use their hands.

The standard interpretation is that the first group conclude that there must be a good but non-obvious reason for using the forehead method, as otherwise the instructor would have used her hands. Dogs do the same thing in Prof Huber's experiments, where they had to pull a lever to obtain a reward, lending support to the idea that dogs have a rudimentary "theory of mind."

They possess a moral compass too, in order to negotiate the complex social world of people, adds Prof Marc Bekoff from the University of Colorado at Boulder.

He argues that the fact that rough-and-tumble dog play rarely escalates into full-blown fighting shows that the animals abide by rules and expect others to do the same. In other words, they know right from wrong.

Dr Friederike Range from the University of Vienna, Austria, has found in experiments where one pooch was given a treat and another denied it that dogs possess a sense of fairness too, though she stresses that the data are not yet published.

"Dogs show some aversion to inequity," she says. "I prefer not to call it a sense of fairness, but others might."

Barking is rare among feral dogs, suggesting that it evolved during domestication to allow dogs to communicate with us, says Prof Péter Pongrácz from Eötvös Loránd University, Budapest. His team has even found a way to use a computer program to understand what dogs are trying to tell us, and can disern whether a pet is barking at a ball, or wants to play with greater accuracy than their owners.

Akiko Takaoka from Kyoto University, Japan, played dogs recordings of unfamiliar voices - both male and female - with each voice followed by a photo of a human face on a screen. If the gender of the face did not match that of the voice, the dogs stared longer, a sign that the image did not match their expectations and yet more evidence that they have been honed to communicate with people.

Meanwhile, Dr Juliane Kaminski at the University of Cambridge has examined how dogs can use human gestures such as pointing and gazing to find hidden food or toys and concludes that dogs do understand that we are trying to tell them something. "Domestication seems to have shaped dogs in a way which enables them to use these gestures from as early as six weeks," she tells New Scientist.

There are also other interesting reads...

But really this stuff is what we already know about... but until now didn't have expensive scientist to tell us. I'm glad now that they do.

Uncle John is at last done with his USDAA pictures and they are up for sale! Contact Pa if you are interested! None of the pictures are meant for commercial purposes. So please let us know just how much you appreciate his work! 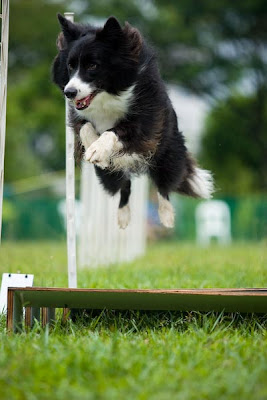 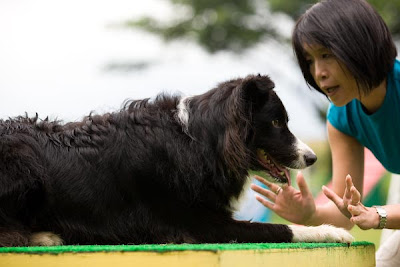 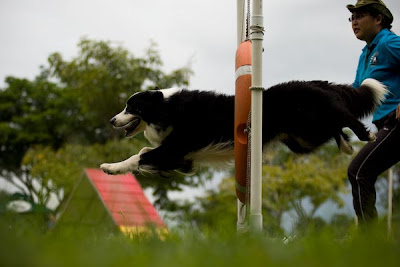 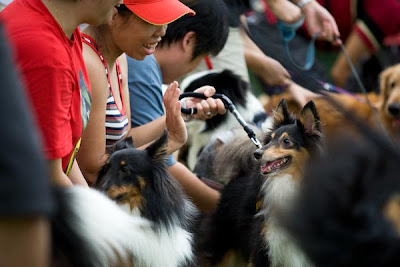 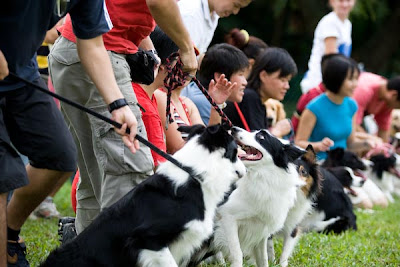 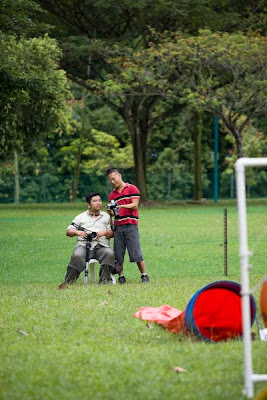 And the money shot for the entire event is in Pa's opinion this one... 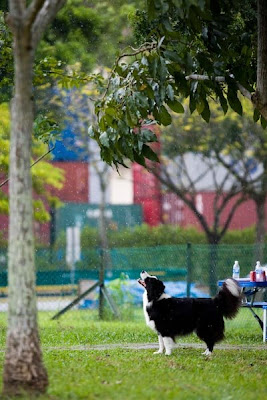 With the little raindrops falling and the doggie looking up... Man...just how much more prettier can a scene like that get. And this is why Uncle John is the pro and Pa is sitting his ass down still trying to figure out just how to use his camera.
at 11:52 AM

Hey, you were there for the National Dog Walk? Missed you and your babies there, if not i can introduce to my boy Jasper. =)