A Loss that shouldn't be

Two Rottweilers owned by a Dutch man based in Nakhon Ratchasima mauled his twenty-month-old daughter to death early yesterday, police said.
The toddler, Romklao Ploo, was attacked and killed inside her house compound in Muang district at 1am. The 42-year-old mother, Jintana, was also severely injured while trying to save the child.

The two canines had been brought into the house to replace the two other Rottweilers that had fought and killed each other, said Jinata's mother, Somsong Phanwiset.

Speaking at her child's funeral, Jintana said the dogs started attacking the child as soon as she had put her down and turned to lock the gate.

The husband, an engineer identified as Johannas Bernadas, is on his way to Thailand.

The woman said her husband had raised the animals as guard dogs after burglars had broken in several times. She said the dogs were untrained and were in the habit of fighting other dogs.

Somsong said the two dogs should be trained instead of being put down.

Another senseless death. A little baby had no need to die. Let us read the article again.
-They previously had two rotties that fought and killed each other.
-The dogs were untrained.

WHAT ON EARTH WERE YOU THINKING PEOPLE?
It is due to such irresponsible ownership that us rotties have a terrible rep. I have heard that some people actually believe that such behavior is in the genes. I can tell you that this is not true.

Genes will get you your size, your structure, and your colors. The rest is really having a good and strong sense of ownership and instilling confidence rather than fear. 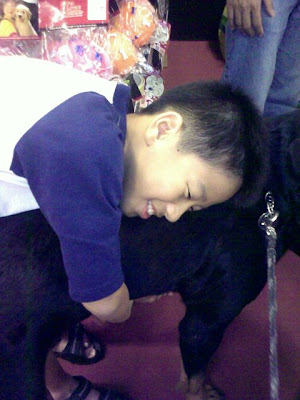 This is some random kid hugging Bruno in a random pet store in Holland Village. Punish the Deed, not the Breed. This death was really unwarranted. She looks so sweet.

haizz.. wad a sad story.. i hate it when people penalize dogs just like that.. it pretty much obvious that the dogs are NOT trained.. should the gal step on the dog's feet? or slap the dog's face? no one knows...

my gal a silky x ms not even bigger then a full grown MS.. was being said in malay by a maid.. saying things like "quick run! a dog! scarly later it bites u!" to a little toddler.. they are tinking that i didnt know malay..

hope some justice is being done to the poor dogs..

Hey... next time please your name at least... so that we wun be strangers!

me ChuppaJess from DFS.. soli la.. didnt know can use my gmail account to log in here.. =P