Elizabethtown / The meaning of Life

Pa just manage to catch Elizabethtown... again. This is probably the 3rd or 4th time he actually watched the show. I think he enjoys it very much.

When Drew Baylor (Orlnado Bloom) is fired from his job at an international shoe company and is then dumped by his girlfriend (Jessica Biel) he becomes suicidal. Just before he is about to kill himself he receives a phone call from his sister to say that his father (Tim Bevitt) has died. He travels back to his family and they discuss that his father is to be cremated in Elizabethtown, Kentucky, his fathers hometown. On his way over to Kentucky he becomes acquainted with free-spirited flight attendant Claire Colburn (Kirsten Dunst). They end up in a relationship and Claire makes Drew a special map for a solitary road trip he has to take on his way home from Kentucky. She writes down two endings for the trip. 1 - He can just go straight home or 2 - Stop and look for a girl in a red hat at a specific farm festival. The film ends with the two of them hugging showing that they get together in the end.

When Drew was following Claire's very super map, he had his father's urn with him. Everywhere he decided his father and him should have visited when he was still alive, he would scatter some of his ashes in the area. Most were places Claire marks on her super map.

two parts of the movie made it especially poignant for Pa this time round. First was the relationship between Claire and Drew. You see, Drew blew a billion dollar deal over a shoe concept. He looked himself as a failure to an extent he just wanted it all to end. As she left the hotel they had spend the night, she waited desperately for him to call her back. To ask her to stay.

But he didn't. Instead, he tried to break up with her. He told her that what she doesn't understand is that he doesn't have a career. He is nothing. He has failed. Hence it was impossible between the two of them. So bye bye. He didn't even want to be here...here.

Pa totally understood how he felt. In asia, a career is what makes a man. In Singapore, failure is simply not acceptable.

She however doesn't care. True greatness she says is what you do after you fail. Do you stick around and make the others wonder what you gonna do next? or quit?

Even until then, he looked at her and figured... she's probably better off without me. Hence, next to the road trip home with the super map.

Claire, I'm just going to say this because you deserve it.
It's not easy for me, but here goes.
Four days ago...I lost a major American shoe company...
Frankly, you could round it off to one billion dollars!
And by tomorrow afternoon,everyone will know.
Something's gonna be published that pinpoints me as the most...
spectacular failure in the history of my profession...
which is all I know how to do.
And I've been here this whole time trying to be responsible and charming... and live up to this success...that doesn't exist.
All I really want...is to not be here.
I'm sorry.
I have a very dark appointment with destiny.
That's my secret.
That's who I am.

And Claire turns around to say:

I guess I just thought a small part of you
might be a small bit sad to see me go.

Sometimes... Life can be that simple.

You have five minutes to wallowin the delicious misery.
Enjoy it, embrace it, discard it... and proceed.

That is some really great advise. Especially since he was looking at an article in the movie about what a super failure he is.

Pa only wish he had Kirsten Dunst dishing out philosophy when he is blue... then again, Pa wouldn't mind being Orlando Bloom just right now. Drew had his enlightened talk with his father and really connected with an urn of ash. Pa on the other hand has decided that the meaning of life can really be condensed to for words.

Grand Bear Pa always told Pa that the one thing you should always ask yourself before doing anything is...

Is it worth it?

That's probably the best advice anyone can give to another. Pa has discovered that...

Probably the best statement to anyone with success in anything. That would be Pa's contribution to his blood offsprings in the future. He also hopes that they will pass on the tradition and eventually publish a book after several generations "Four Worded Sentences to Instant Success"and sell it for $19.90 at the local book store. 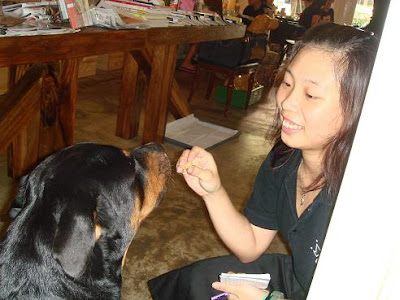 On another note, Pawtobellows is officially closed. We are very sad to see the place go. It was a great place with quality stuff. 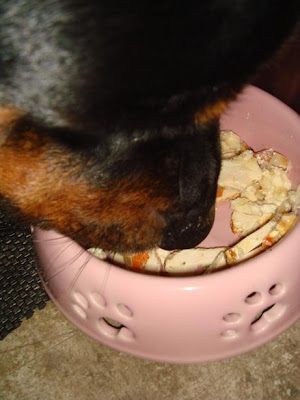 I guess running a Pet Cafe really isn't that easy. There will be a sale of their stuff for Charity on the 8th and 9th of August. Hope those can make it to go on down and say goodbye to one of the best runned, best places for doggies. We will be very sad to see it go.

"You have five minutes to wallowin the delicious misery. Enjoy it, embrace it, discard it... and proceed."-Claire

Gosh! another one closing? I never expect Pawtobello to close.. it thought it always have very good business.. shucks!

Now only left with like Urban Pooch and Earth Cafe? Hmmm