Pa's gonna be out of town for a few days...so i wun be posting much.
But here is some stuff till he gets back.
Guess where am I? 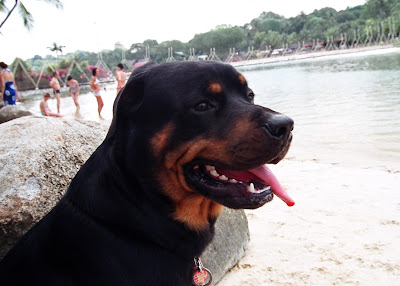 That's RIGHT! I'm at SENTOSA! the Southern Most tip! There were plenty of Ang Mos and they weren't scared of me at all! Even when I was pretending to be Jaws...No one screamed "WATCH OUT! ROTTIE IN THE WATER!"...yummy white thighs. 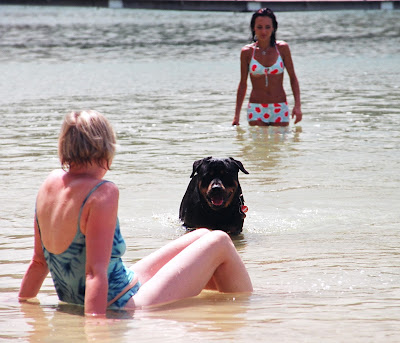 OK...admittedly they were a little strange as well. I hope there isn't a crab in there... 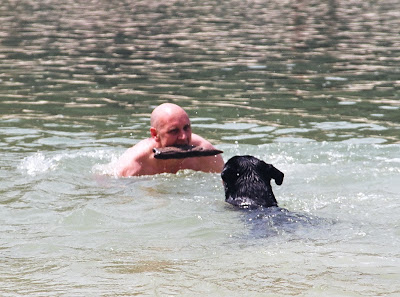 OoooKayyy...someone needs a bath as well. 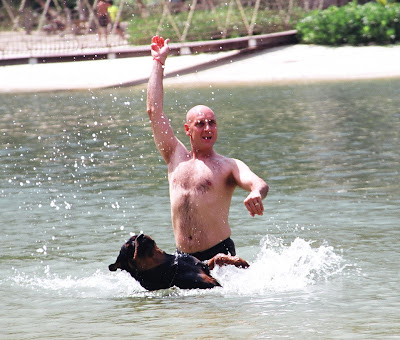 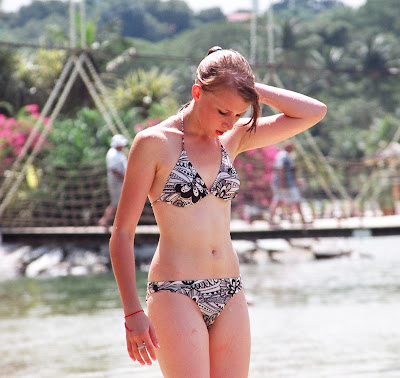 That's right my little darling...come closer...that's it....No wonder its so much easier to do fishing in their country...My Pa say one. 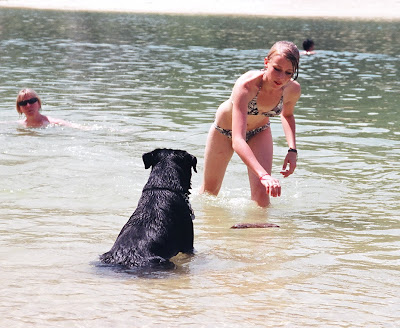 Introducing Ramu the Daschund. Black and Tanned like me. Though he is probably 1/30th the size me, but he has his heart at the right place and a bark to follow. 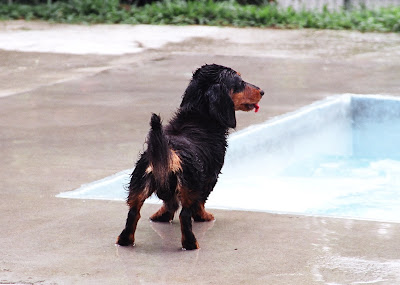 Ramu likes to watch from the sidelines and encourage me to defend myself with shouting tips on how to do that from the side. Sometimes, he's quite the bad influence. 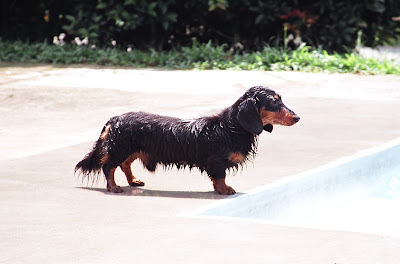 Here you see him watching us both trying to dunk each other in the water. 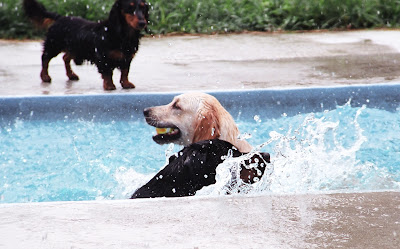 As mentioned before, Ramu has his heart in the right place...but its just that his body can't catch up. No...I do not think of him as a easy treat. 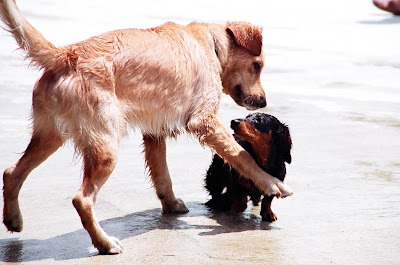 No...I am not Drooling in hunger! its just the swimming pool water! REALLY! Ramu is my fren...NOOOOOoooo.... 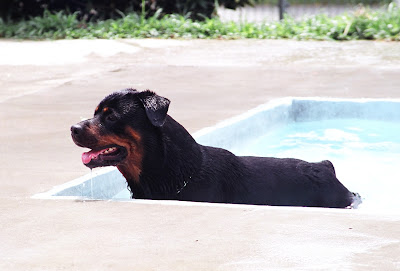 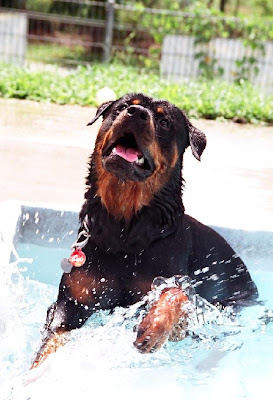 Pa is still playing with some old school film SLR and he brought it to the Swimming pool on Sunday.

get some of the pictures back today. Ain't too bad if I say so myself. 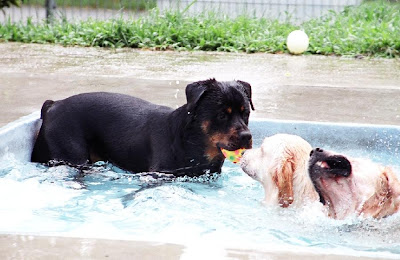 Some of the new dogs wanting to know who I am. Well...I was busy but ready I suppose. 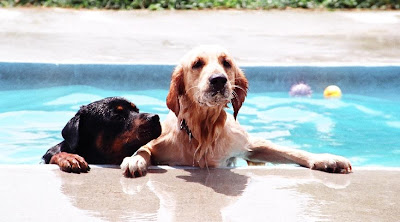 A Canine in need...not all puppies are born with a sense of the water. Here I am trying to console the poor bugger. He's practically foaming in the mouth!

He seems to relax a little already. Dun get too excited dude. 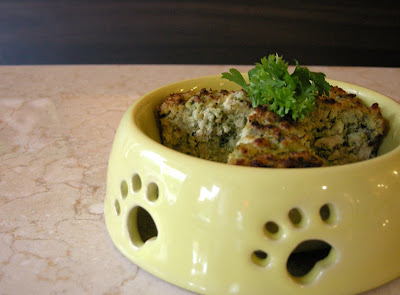 I have been back there 3 times liao and its just SOOO GOOD... Pa keeps forgetting to bring his camera to take pictures (actually I just start on the food before he remembers) so they are kind enough to email us their professionally taken pictures instead!

Its a great place for big dogs too...The portions are absolutely divine! I can't stop myself from finishing every little bit. 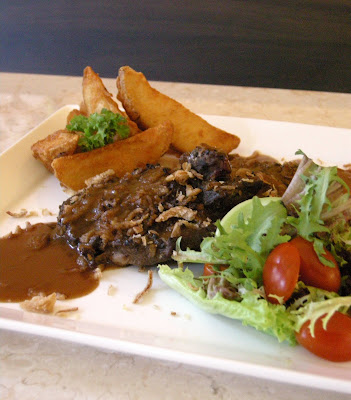 The food easily ranks above dog cafes out there...Value for money, great quality and a very respectable amount as well. The food is simply comparable to most all human cafes out there as well.

At least that's what Pa tells me (sheepishly). I didn't take anything from the table...HONEST! 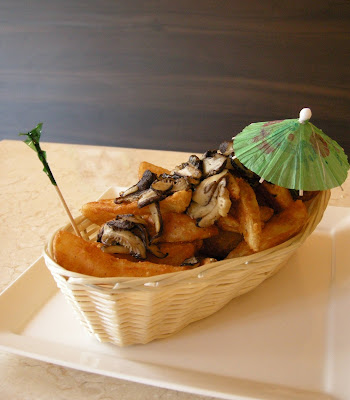 The staff there is uber frenly too! One of them even said I cured her of her fear of BIG DOGS! Silly girl. Us big dogs are always great to Oomans. Just misunderstood. *whispers* Its the small ones that are fierce!

Everyone there is super fast in cleaning up accidents and hence there aren't any undesirable Doggie Smells. Its nicely decor-ed and has a really nice atmosphere. They even give me PLENTY of treats there!

So go on down there and check them out! ST Link

Also... I have been given a half approval for being a TDS Doggie! I should be attending the first TDS meet up this week. It'll be great.

After the second test, it was shown that I didn't go crazy and none of the tester died. So I suppose I am now allowed to help give some relief to people who need them.

Pa told me not to comment too much about the entire episode as while he thinks I did well, apparently some other people have another idea of how "well" I should be doing.

Anyway, I wouldn't be allowed to go to all homes. I guess I am to avoid certain homes due to a conflict of interest. Bah. Ooman politics interest me not. 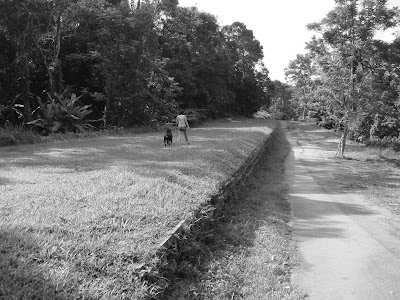 Oomans can be SO silly.

The internet is a place for nonsense. Facts found on the Net should be checked over. Its a place to pass the time and really not take each other seriously.

For example we all know that I really am not writing all this. That is because I am missing an opposing thumb. I wouldn't be able to reach the space bar!

Some of you do have a sense of humour, and I was actually amused by this thread. However, enough is enough.

I have a regular job, 4 dogs to take care, new member accounts to activate, a personal life to lead, on top of running this forum. I am lucky I have 2 capable moderators - Moderator and General Moderator, who have their own regular daytime job, to help me monitor the forum.

We hope the forum will run by itself without much technical trouble, that members will post sensibly and responsibly, that everyone treats fellow members with respect and agrees to disagree. We hope Singapore dog owners and dog lovers behave in a respectable way, because this forum is visited by members from other countries too, countries such as Australia and NZ.

We never like to rule with an iron fist, and usually close one eye as long as the issues get resolved by members themselves.

However, some of you have behaved in such an ill manner, that the moderators and myself have to step in. The sad thing is, even after we've stepped in, these members continue to misbehave! Again and again. A fellow member describes this as "sustained animalistic savage pack misbehaviour".

These members' sustained misbehaviour has caused a negative impact on the forum. Good members are leaving. Good members who can contribute constructively to health and nutrition, training and behaviour, grooming and etc. New members and new dog owners are not learning anything useful except to read the continued gossiping and constant bickering. Good people feel disgusted and leave. DS then becomes nothing but a playground for a small group of selfish individuals.

With your sense of humour, used in appropriate manner, you could actually make this a fun place to be. But you guys choose to use it in a negative way, to poke fun at other members, to launch personal attacks at other members.

Anyone else who wish to follow them, please PM me and I shall be happy to grant you your wish.

Pa was banned with fewer reasons than these. And the Forum admin clearly did not ban people that contributed to the disagreement...That's because they are either Lunch Kakis or themselves.

Anyway, to each his own. Pa has more time to spend on my blog site then!

Check out the size of the crab. 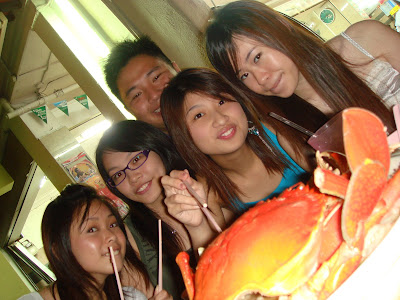 Apparently I have been given a second chance to be a TDS doggie... but i got to go for another test this Saturday after my SCDF training. 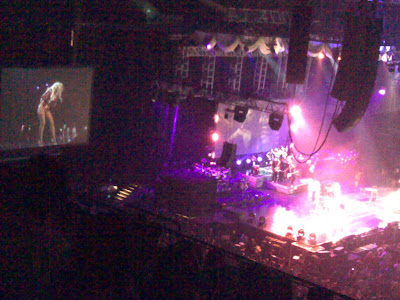 guess where is this? I wan wondering where Pa went, and I found this in his phone...and when I saw today's papers...I realise Pa went to see Christina without me!!!
at 11:27 AM No comments: