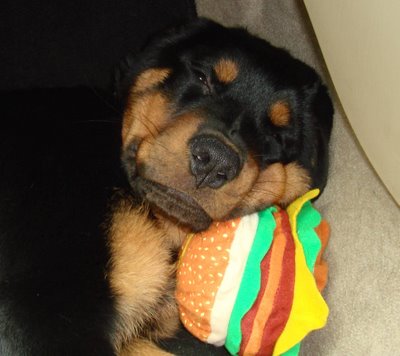 That's my new burger toy.
Pa wonders sometimes whether I am bored. I seem to do nothing the whole day except wake up, eat, sleep, go to the park, sleep, wake up eat and then sleep again.
I wish I can tell him that it is really ok. Its in the blood. Rotties in general are simply rather passive indoors and actove outdoors. That is why in some countries, they allow Rotties in apartments.
Its not that I'm lazy. Not at all.
Pa was kinda upset when he came across this article.

Going doggone mad
By JEFF HARDERCNEWS
Columnist
You know the bureaucrats have gone mad when it's against the law
to keep a chicken in your backyard but killer dogs are A-OK. The recent spate of
dog attacks on young children in the Toronto area is a tragic illustration of
the need for tight control over aggressive dogs -- and their owners.
There were six vicious attacks in May, one leading to the death
of eight-year-old Courtney Tempe. She was mauled by a 130-pound bull mastiff.
Bull mastiffs, pitbulls and rottweilers are bred for their extraordinary
strength, bad temper and ability to kill. These animals are not pets -- they are
not for cuddling -- they are weapons. They should be treated like the
high-powered firearms that they are.
Perhaps there owners should be charged with assault, or in the
worst case, murder when their dogs hurt people. Like a gun, these dogs can maim
and kill. In the wrong hands, they are deadly. However, I'm sure most
folks own these dogs as a tool of intimidation. It's a macho thing that masks
deep insecurity. The owners want to scare people, the same way outlaws wore
sidearms in the 1800s.
The difference, however, is large. Handguns need to be loaded
with bullets, require good aim and the squeeze of a trigger to inflict pain. A
pitbull, rottweiler or mastiff fires without the same deliberate manipulation.
You can't holster a pitbull and it doesn't run out of ammunition.
Politicians from across Ontario could learn a lesson from
councillors in Kitchener-Waterloo. With the help of Kitchener-Wilmot MPP Gary
Leadston, councillors passed a bylaw that will eventually rid the city of
pitbulls.
Those pitbulls that were already licenced when the law
came into effect last year had their permits grandfathered. But that's the end
of it. No additions from outside the city and no breeding inside the city.
The law requires puppies to be destroyed. It's a start.

It is sad when people and human beings react like this to breeds like us. Sometimes, humans should ask themselves just who is to blame.
In Singapore, a little boy was attacked by his family's own Rottie and was injured. But apparently the Rottie has been chained in their garden the ENTIRE TIME and never been let out to even walk.
the little boy uses a rolled up newspaper and for 4 months...poked the dog looking for a reaction.
Pa says dun need 4 months. If it were him, 4 hours he will already rip the boys head off.
My Pa can be quite violent hor.
What do you expect us Dogs to do when you confine us to a space to small for us for 18-20 hours a day...and then let out in the night? Anyone, not only dogs...would go a bit crazy.
Bad Dogs? no... only Bad Owners.
Pa feels that there should be more effort into educating the public about doggie care...big or small. We are living breathing beings. We are not toys that sit passively for you until you're ready to rub our heads for that 5 mins a day.
We need YOU to pay attention to us. We are like children waiting to be told what to do, when to do it, how to do it, who we should trust and where we should go. Do not blame us when we do not do the right thing. WE CANNOT READ MINDS!
The first year of any dog's life is extremely important. That is when our habits are formed and duties are learnt. Too many times I see shy and nervous dogs at the park...Owners are afraid even to allow their dogs to play.
WE ARE NOT HUMANS. We play differently.
Pa was talking to a family considering getting a dog...and when he mentioned just how important spending time especially in the first year is, Pa swore he could see the eyes glaze over at the thought of spending that sort of amount of time with the Dog.
Please...if you feel you cannot spend time with us, then...well...do not let us into your family. We do not vandalise, rip or tear up the furniture for nothing. We need you to tell us what to do. Not leave us alone.
at 4:52 PM

most of us make great friends and companions IF we are taught how to! but sadly, not all our doggy counterparts have good human leaders to guide them throughout life. :(

I think the best way is to make it mandatory for new doggie owners to take up a course on how to treat your dog.

Educating idiot owners would be the fastest way to reduce abandonment.