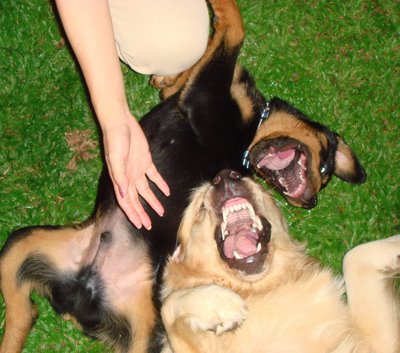 I am am learning all sorts of things at the Park
Bailey's mommy is a great teacher. That's her hand there conducting our duet. We were singing "Who let the Dogs Out....Woof Woof Woof Woof" and she was correcting our pitch and timing.
We weren't very good but we had plenty of fun.
Pa made a mistake in the previous post when he called Scuba a Pit Bull. Sorry SCUBA! But really breed isn't very important. Like Pa likes to say..."All Dogs go to Never Never Land. Where the Grass is Green and the Girls are Pretty."
ermmm....he also says that there are NO SUCH THING AS A STUPID DOG. ONLY STUPID OWNERS. Pa says sometimes that can be applied for humans as well.
But WHO knows??
Eve & Fei> YOU ARE MOVING TO JAPAN!??!! But why??? When are you going? Where do you usually go? Yes, we should meet. Do you speak Japanese?? Wow. Pa is teaching me a little bit of Chinese and Cantonese and Hainanese. But mainly I dun really understand him.
Grandma always scold me in teochew...but I also dun really understand her. Sounds colorful though.
Jaffeboy> I heard about the money belt thing also. I think that would be ultra-fun. We can go to a doggie cafe and order anything we want!! Pa said he's going to get me a Back Pack thing when I grow up first. So that we can go trekking into the jungle together and I can help carry some stuff.
OH BOY! I can't wait. But....somehow...that strangely sounds like work. Oh well.
Buster> could you tell me more about Dogs with Blogs? I think Pa has already joined but he isn't sure what is it about and maybe a link to Magic Fever as well.
Ermm...I'm a new comer. But I bet I can rival Fever in the Cute Factor. UNTIL NEXT TIME...
Chester> Yes. We must educate the public that 4 legs Good....2 legs Bad....We are NOT the one to be feared. We do not have weapons but our teeth which is made to chew FOOD! We do not invent big dirty bombs and then detonate them on Coral Atolls to see just how powerful they are.
4 legs good. 2 legs bad.
Bear Bear the Fearsome Rottie Fact #2
The average size of male Rottweilers is 24-27 inches (61-69 cm) tall with a weight of 95-130 pounds (43-59 kg). Female Rottweilers are typically 22-25 inches (56-63 cm) tall with a weight of 85-115 pounds (38-52 kg). Females also produce unusually large litters of around 10-12 puppies.
We are known for aggression, intelligence, and protective abilities. With proper training and handling however, We can also make loving and devoted pets and companions. We are calm, courageous and reliable and are strong fighters that will zealously defend our families. Often we seem immune to pain.

These jobs are not meant for the faint-hearted.

In this day and age not everyone of us might be called to undertake these tasks, but nevertheless, we still harbour the skills and characteristics that made the us successful. Many of the us are still gainfully employed as:

Bear Bear
I just looked at that cute pic of you again in the previous post and I saw your little teeth!!! OH SO CUTE!! You are a lucky doggy coz your daddy takes you to the park and you get to play with other doggies so often. You're off to a good start in life.
I agree with you. Breed is not important to us either. Neither is colour and it's so silly that discrimination happens among humans and now it's happening to doggies too.
We're leaving for Japan in November. It's very sad because Fei has to stay back in Singapore for 3 months at a boarders' and then gets picked up at the end of Jan and back on a plane to Tokyo. I'm going to miss her a lot. Yes, we speak Japanese enough to live there but it could get better I suppose. I've been sneaking in some Japanese phrases too with Fei.
It's important to have multilingual dogs!

We only go to the West Coast Dog Run but not often because we don't have a car here and taking cabs are very hard with a doggy the size of Fei.

A back pack sounds like fun for you when you become a big boy. There's one designed for small breeds & I hope my MaMa won't get any funny ideas.

how come you told me that bear bear will grow up to be 80 kgs?

I might go back and see bear bear soon. I am sure he misses me.

That description of a Rottie sounds like a wired fox terrier except for the size!

rottie is so kawaii!!! *smile*