Dun Mess with the BEAR 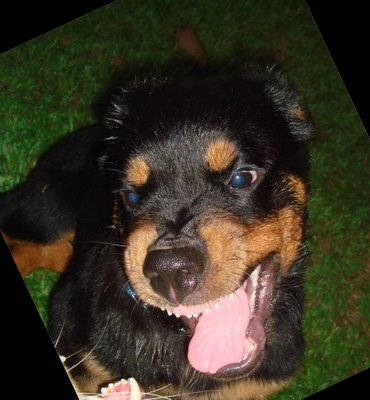 Wow...
Sorry for the lack of updates as Pa was rather busy with WORK.
Some people have to WORK to enable our Singapore Economy to move forward.
So anyway, it has been a GLORIOUS 3 days. The Sun is out even though it rained cats and dogs (no pun intended really) in the afternoon.
We went a little earlier just yesterday before anyone else except Hannah. Hannah isn't too socialised and she's shy and nervous most of the time. I tried to play with her but she was just too....Atas.
Anyway, an elderly couple with a 7 year old Jack was walking outside...and they were surprised to find out that I was a Rottie!
"I thought Rotties were very vicious dogs and that they can KILL. This one seems happy." The old man wasn't even joking.
I was SOOOOO angry! How could people discriminate against Dogs and their Breeds? Look at SCUBA?? he is a PIT BULL and he doesn't even move when I lick him ALL over his face! 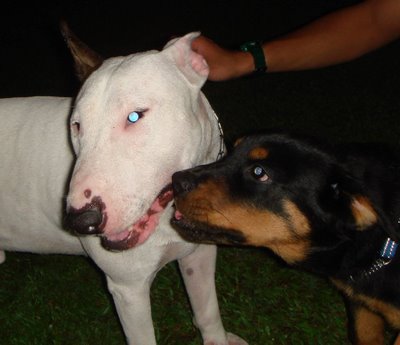 This is too much.

Nobody understands or knows much about us Rotties.

From now on, I will give a little bit of history and temprement of Rotties with each post. If you disagree or have more to add, please feel free to comment and I'll correct or add it in my next post!

-Tracing the history of any breed of dog prior to the 1850’s is almost impossible. The origin of the Rottweiler is not a documented record, due to the Rottweiler being considered one of the oldest dog breeds.

-The Rottweilers origin goes back to Roman times, we accompanied Roman troops on their journey through the Alps. Some of our roles were herding and guarding the stock and protecting the camp. It is documented there was such regard for these dogs that Nero himself has several around his palace for guarding purposes.

-In the region of das Rote Wil, which later became Rotwil and later still Rottweil, we bred with the native dogs and became known as the “Butcher Dog”. Our role became driving, herding, and guarding cattle, sheep, pigs, and pulling carts. We also protected our masters and were known for wearing money belts around our necks, in order to keep our masters lively hood safe from thieves.

Actually that's 3 facts. I will educate the public more about our breed in future posts.

Halo!! Pit Bulls are banned here. The dog in the picture is a BULL TERRIER! Just like people don't understand your rottie, you can't tell the difference between a Pit Bull and a Bull Terrier?!

Are you sure that is a pit bull? He definitely have a egg shape face and by the sound of it, he or she has a good temperament.

Can you please ask where the owner got him or her from?

Yup. That doggy is definitely a bull terrier. On the subject of pit bulls, when were they banned in Singapore? Actually I'll go google that and see if I can find some answers.

Yes, TK. A lot of people are ignorant not just about rotties but bull terriers and GSDs too. And can you believe my little black & tan mutt scares men the size of great footy players? (knocks head on the wall)

We love you bear bear. We should meet soon before we move to Japan.

Sorry...I always get the two mixed up. My bad. Bear doesn't care about breeds and stuff.

Bear Bear, the next time you carry your Pa's money belt; remember to show me ok?! I heard those "fancy papers" can get us some really nice lamb chops... Yummmy... U show me the money, I show U the meat! hahaha

Yes you are a noble brteed and so cute!

Hey, have you signed into the Dogs with Blogs forum yet? We need you to vote for you fellow Singaporean Magic Fever as the Best Picture of the month!

Show your support! And she is so cute...

you go puppy!!! show them what you're made of and dismiss any misunderstandings about your breed!

just like how most people think border collies abhor cats and will herd/chase them to their deaths (i suppose some dogs do, and it may not even be breed specific!!), i've proven them wrong because i live with two of 'em cats!

you have fun! will check back here in awhile! :)