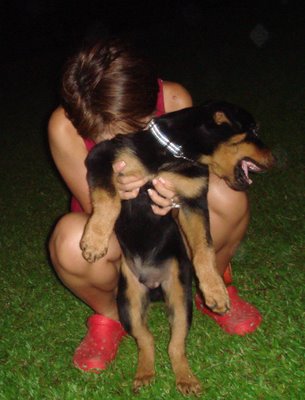 Humans are Strange
I am Bear.
A potentially dangerous dog that can do practically anything you want a dog to ever do.
I am not a Towel. Jaffe's mom suddenly decided my coat was nice and soft...and begin rubbing her face on it...leaving an ultra long bogger on my coat...which Herbie later ate.
I am Bear.
Hear me ROAR!
I had lots and lots of fun last night at the park. There were a few new people at the park and a small incident occured. I hope those people would come back soon as if they thought Tommy was bad...wait till Bear comes about... especially with my new jedi training.
Some people dun like to bring their pets out to socialise. I am glad my Pa decided that I needed a lot of socialising.
Also met a new bunch of people with a one year old Jack...that has NEVER been socialised or even potty trained! Such lucky...I mean... Such ill-disciplined dogs would need more TRAINING!
I guess some humans have less time for their dogs. Like an Auntie I met with a huskie that belonged to her daughter....she had to walk her dog because the huskie has been cooped up at home all this time!
So sad.
My Pa encourages EVERYONE out there to bring their dogs out everyday for a walk and to socialise their dog so that they would know how to behave and play.
I like Herbie.
He's just SO easy.
I think I'm going to adopt him.
at 11:27 AM

Ooooo... MaMa will "KILL" you for putting her picture on your blog!!! Thank goodness you stick to the no human face policy here so the "KILLING" will be merciful.

I'm lucky my coat is pretty rough, otherwise I'll end up with very yellow fur; if you know what I mean.

bear bear
I am with you! It's important for doggies to be out on walkies everyday and meeting other dogs and humans in the neighbourhood. We were surprised to have met some 'dog owners' here in Singapore and they come up and say hello to us and then tell us that they have doggies too but we were wondering what they were doing in the park without their doggies. Then they told us that they seldom take them out for walkies. Strange isn't it? (and sad too)
Keep up the jedi training. We can see you getting stronger with the force.
love
Fei & E