Why just rottweilers?
Rottweiler owner Satpal Kaur says insurance measures should be for all large dogs
THIS woman is her dogs' best friend, judging from the money she is shelling out for them.
By Andre Yeo
12 November 2008 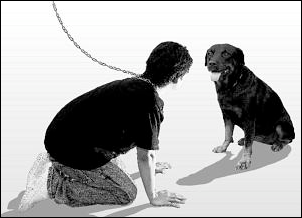 THIS woman is her dogs' best friend, judging from the money she is shelling out for them.

She paid a $6,000 fine, plus compensation to her neighbour because her five rottweilers went after another dog.

She spent $10,000 on renovations to help contain the dogs.

And she is paying to house two of them in pet hotels, as she was allowed to keep only three of the dogs in her home.

Now, she might face new bills for $100,000 insurance coverage and a banker's guarantee of $2,000 if she insists on keeping 'dangerous dogs'.

So are the authorities being unfair to dog lovers or do owners deserve to be leashed?

The Agri-Food and Veterinary Authority (AVA) told The New Paper that new rules were being considered following reports of vicious attacks by rottweilers on people and other dogs locally and in other countries.

She was fined $6,000 for letting her dogs out unleashed and unmuzzled, and had compensated the other dog's owner.

Five potentially aggressive dogs, and inadequate control over them. So, who deserves the leash?

But Madam Satpal, 51, told The New Paper yesterday that she was upset to hear the proposed new rules.

She said it was unfair that rottweilers were being singled out by the AVA and said all large dogs should be placed in the same category.

The AVA had said it was thinking of creating a new category of dangerous dogs, with the rottweiler and its cross-breeds being included in this group.

The guarantee would be forfeited if the dog strays, bites someone or is reported lost.

But Madam Satpal does not think all these rules are 'right'.

'I am already paying a hefty price for their lodging, per month. This will be added cost for me. And already the economy is so bad. Everybody is feeling the pinch, including me.'

So, why keep rottweilers?

She said they were like any other dogs which could also be ferocious and harm humans.

'Why only categorise rottweilers? You should go for large breeds, then it's fair.

'It's the way you bring up your dog that actually matters.'

So it seems even dog owners agree that people and not the dogs are the real issue.

But Madam Satpal thinks the proposed new rulings should be for new dog owners as current rottweiler owners would have already sent their dogs for obedience training and would have been tamed by then.

But what about her rottweilers that attacked another dog? That's hardly the act of tame dogs.

She said the incident arose because her front gate had malfunctioned, allowing the dogs to escape.

Her case might well have prompted the proposed new rulings. How did she feel about that?

She said it was unfair for her to get the blame as her case was the one that had attracted the most media attention.

Mr Jack Wang, 58, the executive director of a security company specialising in training guard dogs, owns a rottweiler and said the proposed rules were unfair to rottweiler owners as the coverage was too high.

He has been training guard dogs for 25 years and owned 20 rottweilers during this period.

He said: 'The insurance policy is quite unreasonable because if the owner looks after the dog properly, it would be quite unnecessary.

'Owners might put the dog down or let them out onto the streets. Not all rottweilers are killer dogs.

'Some are very friendly.'

According to the American Kennel Club, the rottweiler is a calm, confident and courageous dog that chooses friendships carefully.

It also has a desire to protect home and family, and is an intelligent dog with a strong willingness to work.

A veterinary nurse with four years' experience, who declined to be named, said she has seen around six or seven rottweilers and said they should not be 'punished' for being built the way they are.

She said rottweilers are meant to be guard dogs,

So, it's the owners who should be educated on what is required of a rottweiler owner instead of lumping the breed into a dangerous dog category, she said.

She added: 'The AVA needs to have a process to screen owners to see who is suitable to own such dogs.

'Whoever owns a rottweiler should be able to handle them. The aim should be to educate the public about this breed.

'If you slap on these rules, and the owner can afford it, and is still irresponsible, then it would be counter-effective.'

So should we make potential owners of potentially dangerous dogs go for a psychological screening and civic responsibility counselling?

Forget the obedience classes for dogs and apply them for owners instead, perhaps.

Too much trouble? Get a hamster instead
ONE of my friends, who lives in Scotland, is a registered breeder of rottweilers.
By Reggie J
12 November 2008

ONE of my friends, who lives in Scotland, is a registered breeder of rottweilers.

From her, I've learnt that the rottweiler was bred in Germany for the specific purposes of guarding and personal protection.

These dogs, she tells me, are dangerous in the hands of a novice owner. They are animals that respond in a very instinct-driven way.

So, it is difficult to understand why some people would want so casually to keep them as pets.

The problem with rottweilers is that, as a breed, they have been engineered to become killing machines. The bite from a rottweiler is much harder than the bite from, say, an alsatian.

So how do we control their presence in your peaceful neighbourhood? A good way is to license them - not the dogs, the owners.

To be able to get a licence to own and control this type of dog, the potential owner should be required to first undergo some training.

Let's get an assessment of the owner's home.

While we're at it, let's also get the dog's opinion. Is it fearful or comfortable in the hands of this owner?

Is all this too much trouble for the owner? Then keep a hamster, I say.

After all, if you want to handle another killing machine - the family car - you need to pass a driving test.

So, why not pass a test to control a rottweiler?

We have read of too many cases of dog owners who are not capable or strong enough to control their dogs.

One hears of how loving and wonderful someone's 'rottie' is and then we learn how it tore another animal or child to ribbons.

A friend of mine has two daughters, aged 7 and 5, and both have been cornered by large and seemingly aggressive dogs - let loose and unleashed - in the park near their house.

When confronted about their rampaging animals, the dog owners would, at best, give a blank stare, like the victim was the one with a problem.

I would like to see rottweilers banned as a pet.

If not, a muzzle and leash must be important pieces of the rottweilers' wardrobe, and they should never be allowed to leave home without them.

In fact, it is mandatory for every dog owner to adhere to this when taking their animal out in public places or risk being fined.

But in land-scarce Singapore, there is no place for these animals, leashed or otherwise.

Dog owners should also consider the feelings of fellow citizens. A Muslim cab-driver friend told me he once declined a fare because the commuter had a dog and was understanding about it.

Only guide dogs should be permitted to travel in taxis and on public transport, and allowed in public places such as restaurants and hotels.

How many times have we seen pet owners take their dogs to eating places?

So if we can't change their behaviour in a nice way, let's bring about change with strict rules.

Put the owners on a leash and the dogs will behave like, well, pussy cats.

Housewife jailed 20months after getting her shih-tzu to bite her maid on thigh and finger.

There are 323 rottweilers in Singapore

Every year, there are about eight cases of dog attacks involving dangerous dogs

And at least three dog attacks involve rottweilers every year

Please SHUT UP. I have NO IDEA why the newspaper decides to interview you again, or that WHY you actually decide to comment... But you are probably THE worst person to comment about Rottweilers.

And to have the papers labeling her as HER dogs' best friend in the most sarcastic manner would probably thrill her instead of insult her.

and said all large dogs should be placed in the same category.

You are a complete and utter moron. Instead of fighting this, you decide that everyone should suffer. You only serve to alienate yourself further.

Why only categorise rottweilers? You should go for large breeds, then it's fair.

'It's the way you bring up your dog that actually matters.'

It is NOT fair that you decide NOT to train your fucking dogs and have them attack another dog... and how you bring up your dog DOES MATTER.... but apparently not to you!

She said they were like any other dogs which could also be ferocious and harm humans.

has her stupidity know NO BOUNDS?

The next article has Reggie J (who?) a FORMER Singaporean Marketing Professional... comment like an EXPERT... in which his ONLY experience with Rotties is that he has a FRIEND in Scotland, a registered Rottie breeder as his link.

What sort of a expert commentary is that? His little article, on page 2 of the newpaper, already started off with quite a few wrong "facts" and "details" which I am sure his friend in Scotland would be rolling in her grave if she ever finds out.

I am angry, but being angry in the face of such negative publicity just means I have to work harder quietly to change people's perceptions. 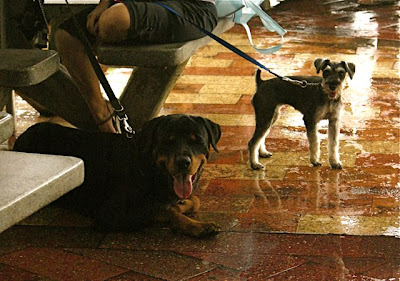 One fucking step at a time. 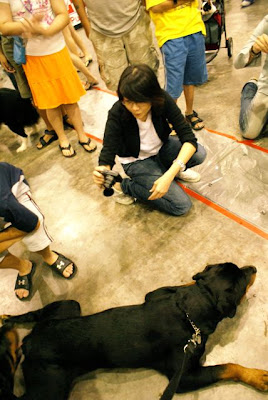 They interview her coz she is richer.

They interviewed her because they are looking for something to spice up their articles. I believe the reporters are pretty skewed to begin with. With such bias reporting, it is no wonder the entire population is getting stupid... *sorry, i am more upset than ever!*