White Tiger Attacks / Rottweilers and what they are

Malaysian worker dies after being attacked by white tigers at zoo

SINGAPORE: A Malaysian contract worker died after being attacked by three white tigers at the Singapore Zoo on Thursday.

The worker has been identified as Nordin Bin Montong. The 32-year-old had jumped into a moat at the White Tiger exhibit and was subsequently attacked by the white tigers.

The commotion attracted the attention of nearby zoo keepers who went into the exhibit to distract the tigers in order to rescue Nordin.

Police said they received a report at 12.30pm about a man sustaining neck injuries at the zoo. Paramedics were called to the scene and Nordin was pronounced dead at 12.45pm.

The police are investigating the cause of the incident. The White Tiger exhibit has been temporarily closed as a precautionary measure. 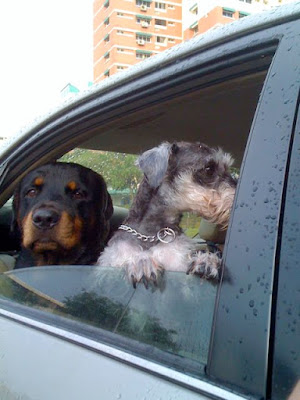 Please... watch this video about Rottweilers
at 5:59 PM

Read about that story too. I think there was something wrong with that malay man. Probably suffering from depression or something & maybe that's why he was suicidal? I hope the people don't decide to put down the tigers. It was not their fault for killing him.

Back to my BOOGIEself,
Solid Gold Dancer