Its time for a Diet for Pa... he reckons he's getting a little too big. 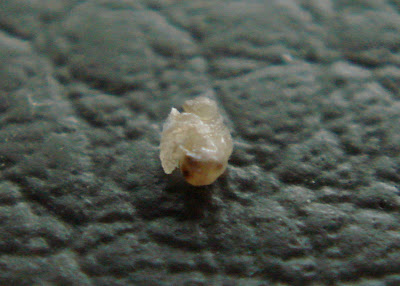 Can anyone guess what is this? Pretty cool huh...its like less than 1mm big. 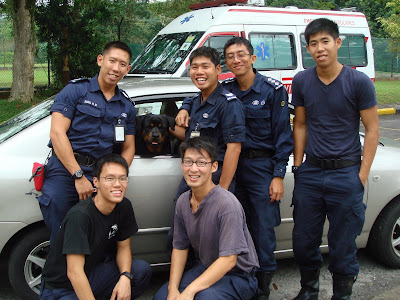 Some of my Trainers... Grandma says they love me really a lot. But of course dunch you think? 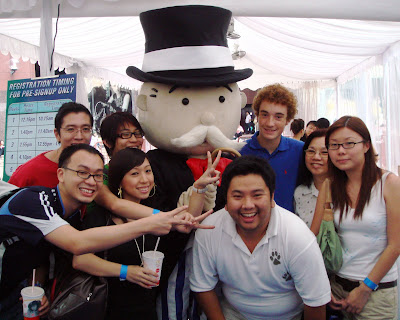 Pa played the Silkair Monopoly Challenge... didn't do that great...but he had lots of fun! 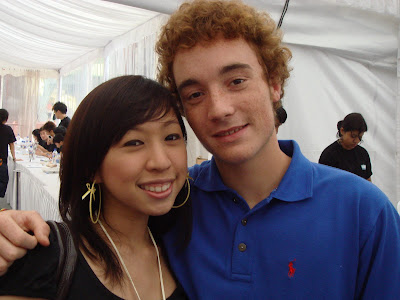 Looks like Bruce doesn't need help with the ladies in Singapore... Anyone else wanna meet him?

For those that do not know about the current doggie situation in Singapore...

Family has five rottweilers; neighbour says they are a threat to other residents, but the family disagrees

A FAMILY'S five rottweilers are making their neighbour nervous.
The dogs, known for their aggressive nature, are a noisy nuisance and a threat to others in the neighbourhood, claimed Mr Foo Seck Siong, 66, who lives next door.

And why, he asked in The Straits Times Forum on Friday, was his neighbour allowed to have five dogs?

'I have to keep one eye on their gate when I am watering the plants outside, in case one of their dogs slips out. I fear for my safety,' the semi-retired businessman told The Sunday Times.

He tells his wife and grandchildren to stay indoors when he sees the dogs in his neighbour's 20m driveway.

But the dogs' owner is arguing that they are merely playful pets who stay within the grounds of their Lengkong Tiga bungalow in Kembangan. They are never let out.

To Madam Satpal Kaur, her parents, her three sons and daughters-in-law who live there, they are ultimately harmless.

'Right now they are only puppies, so they are like playful young children,' said the 51-year-old IT business owner.

Though they did occasionally slip out through the gate, a dog trainer's weekly 'obedience' classes have worked.

She has five dogs, when three is the maximum allowed by the Agri-Food and Veterinary Authority (AVA), because her original pair produced four puppies.

Their 'father' died last August, leaving the 'mother' and her four pups, now about 15 months old.

Madam Satpal said she appealed to AVA to keep them all as some are handicapped, and putting them up for adoption will mean new owners may face high medical costs. She did not want to kill them either.

She got her approval.

Even so, rottweilers have often made news for attacking people and smaller dogs - in a 2005 Straits Times report, a rottweiler attacked its owner's seven-year-old son.

Madam Satpal admitted that the 'father' of her family of rottweilers once bit another terrier after the other dog 'snapped' at him. But the rest are no trouble, she said.

She said Mr Foo was mistaken about seeing her employee 'attacked' by the dogs last Sunday, an allegation he made in his Forum letter. 'The worker has known the dogs from young and often plays with them,' she explained, although it may have seemed otherwise to her neighbour on that day.

Mr Foo has lived in his house for 17 years, while Madam Satpal's family moved in seven years ago.

Yet neither has ever spoken directly about the dogs. Madam Satpal said she was too busy, and Mr Foo said 'there is just no chemistry between us'.

Other neighbours along the stretch of terrace and semi-detached houses are not as agitated as Mr Foo, as long as the dogs are safely locked up.

Still, in Singapore, they are required to be muzzled when in public.

Mr Koh Boon Cheng, a neighbour who owns a husky, pointed out: 'Rottweilers are very fierce and they have big mouths. They should wear a mouthpiece all the time.'

Even if they do not attack, their loud barking bothers nearby HDB residents, two of whom can hear them in the early morning, barking at people walking by.

Mr Foo has offered this solution, which Madam Satpal is considering: 'Build a manual gate in the middle of the driveway so the dogs won't accidentally run out.'

Honestly... Pa doesn't know what to make out of them... Firstly they breed their dogs... irresponsibly. Secondly they are placed all together as a Pack. Does this report help the Rottie Cause? NO! In fact, it probably worsened it. What do you guys think?
at 1:28 PM

Eeeew! What's that tiny thing? Is that a tick egg? Would be interested to know...hehehe!

Actually, Rottweillers can be harmless & friendly dogs if only IF they are treated & brought up well in a friendly environment. If they were mistreated badly or chained or caged up for the rest of their lives with no hooman & dog interaction, they can become crazzee! Not only Rotties, ALL doggies too regardless of what breed. Goldens can be crazzee too ya know? I've met a few who actually attack other dogs that are harmless for no reason. I don't know what caused them to be like that but sometimes it's also genetic OR they are just born like that with some kind of prob. So, I still disagree with what Singapore is imposing with those dumb rules.

These kind of guard dogs should be trained from YOUNG like three months old & MUST be socialized at a very very young age with other hoomans & dogs. OB training can help them & also snipping males can help to reduce their dominance too. Dogs must be brought out for walks regularly to see the outside world coz if they are chained or caged in the back kitchen for 24/7, the dog can really go mad. I mean wouldn't you? Wouldn't I? I would! These irresponsible people are make other people scared of these breed or any other black big dogs like Dobermanns too...*sigh* Hoomans never change.

EEEWWW!!! What in the world is that thing? (Mummy thinks it's orh-kim)

Mummy read the Rottweiller story and the first thing that came to mind is meeting you at the pool. You are such a clown teasing me. Mummy was laughing away at your antics but I was to afraid of you. But I hope things will get better if we get to meet more often. (Provided the other nasty dog is not there...whimper...)

Mummy's impression of Rotties changed after meeting you. You're so gentle and so funny. Not at all threatening. That Family did a very inresponsible thing by breeding the rotties. Keepng them in a pack is also not a good decision. They may understand the breed well (or so they claimed) but what are they doing in educating the public. Heck...they dont even talk to their neighbours about the dogs. Sigh...stupid homans.

I think your daddy is doing a great job in allowing you to socialise and get along well with other dogs. I'm still trying to learn. Mummy adopted me when I was more than a year old and she couldnt really establish my history. I'm good with homans but not so good with other doggies. I need lotsa lotsa lotas time to warm up to them. That's why I'm only okay with Snowball cuz we hang out a lot.

Hopefully with more outings, I can get better with time.