It is a very sad day for us Rotties and other Cat B dogs.

NEW ANIMAL AND BIRDS (DOG LICENSING AND CONTROL) RULES The Agri-Food & Veterinary Authority (AVA) has made revisions to the Animals and Birds (Dog Licensing and Control) Rules. The revised Rules will come into effect on 1 Sep 07. 2 The new Rules are targeted at better management of the dog population as well as to instill responsible pet ownership and discourage pet abandonment. The key changes are as follows: (a) Mandatory microchipping of all newly licensed dogs 3 All licensed dogs must be microchipped with an ISO compliant microchip. Dogs that were licensed before 1 Sep 07 will be exempted from the requirement. However, owners of such dogs are strongly encouraged to have their dogs microchipped for better traceability. All new dog owners must submit documentary proof from a veterinarian to show that their dogs have been microchipped. 4 microchipping is a more effective and permanent identification system than dog adges. It is a more reliable way to ensure traceability in the event of a rabies outbreak. At the same time, it would also help AVA to trace and return lost dogs to owners. (b) Harmonisation of dog licence fees 5 Under the new Rules[1], the annual licence fee for all unsterilised dogs (both male and female) is $70 while the licence fee for sterilised dogs is $14. The alignment of fees takes into account that unsterilised male and female dogs are equally responsible for breeding. 6 To encourage early licensing of dogs, the new Rules allow owners to license their dogs that are up to 5 months of age at a reduced rate of $14 a year even if the dogs are not sterilised. However, owners will have to sterilise their dog before the expiry date of the dog licence as otherwise, the licence fee of $70 is payable at the time of licence renewal. 7 A group licence fee will also be introduced for dogs kept in registered farms for breeding, boarding and training. The licence fees are as follows: i) More than 300 dogs on the premises $3,500 per annum ii) More than 200 dogs but not more than 300 dogs $1,700 per annum on the premises iii) More than 100 dogs but not more than 200 dogs $1,100 per annum iv) 100 or fewer dogs on the premises $ 650 per annum (c) Higher penalties for keeping of unlicensed dogs, allowing dogs to stray and failing to muzzle dangerous breeds of dogs in public places 8 A dog above 3 months of age must be licensed. To discourage dog owners from keeping unlicensed dogs, allowing their dogs to stray or not muzzling dogs of breeds[2] that are required to be muzzled in a public place (eg, the Rottweiller or Mastiff); the maximum fine for such offences has been raised from $500 to $5,000. 9 In the event of the loss or death of a dog, or a change in address of the dog owner, the owner is required to inform AVA within 28 days. Under the new Rules, a dog licence is not transferable. When a licensee does not renew the dog licence upon its expiry, the licensee may be fined for keeping a dog without a valid licence and will have to apply for a new dog licence. d) Pet shops and dog breeding farms to help buyers license their dogs 10 All dogs for sale at pet shops and dog breeding farms are to be licensed at the point of sale. The pet shop or farm would be responsible to assist a new owner in getting his dog licensed, but the licence fee would be borne by the owner. 11 AVA will continue to review our policies and regulations, in tandem with our public education efforts, to ensure that they remain relevant and support our efforts to promote responsible pet ownership.

I didn't want such a stupid and silly rule to take up too much space...so I'm just leaving the format as it is.
Basically the law is tightening up and one of the key points is that anyone caught not muzzling a Cat B dog would be fined $5000 up from $500.
These are pictures of Muzzled Dogs.

NONE of them are in a threatening stance...but what is the first thing that goes through your head when you see them in muzzles?

Dangerous Dogs that bite and kill.

As it is, everytime my Pa brings me out... he has to good-naturedly explain to people that approach him that I am very friendly and No I do not kill with a single glance.

My Pa lets little kids and adults alike to interact with me, educating them as much and as far as possible in the short time... and even have to listen to other dog owner's problems and offer advise for them.

But he has NEVER muzzled me. He carries one around everytime he is out with me, but mainly it is reserved for some half-baked moron that thinks he knows everything. Putting on a muzzle not only makes me look very angry, it also makes me insecure as I do not have 2 hands but instead a mouth on four legs.

However, even Pa has to put a disclaimer every single time someone meets me... he warns them especially the kids that NOT all dogs are like me. And they should exercise caution always. I guess while Pa doesn't agree to breed discrimination, He does think that there are exceedingly bad owners out there. But muzzling a dog isn't about the Breed...its really about the dog

Moreover, a muzzle simply wouldn't be my style. 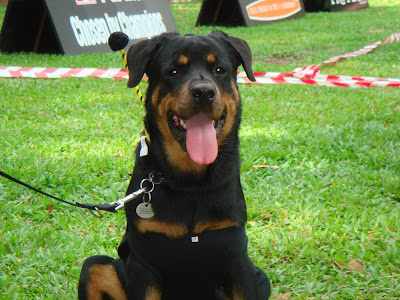 Oh man - that is horrible - how on earth are people going to see your beautiful happy smile with a muzzle on :( All the rotties I have ever met have been the biggest, sookiest dogs - hardly what I'd call dangerous.

BSL is the stupidest thing EVER invented. Just another case of the responsible being punished for the stupidity of a few dumb humans out there :(

i would really hate to see a muzzle on you bearbear, honestly. :(

i agree with you paws down that a muzzle will only make a dog more edgy and insecure (S knows a dog who actually became borderline aggressive after being muzzled)...how would humans like having heavy duty masking tape on their mouths?!

i really think they should work on the humans instead of targeting on us dogs!

poor thing bear bear...juz becoz there r some rotten eggs out there....they implement such a rule 2 affect u

ditto to what chester said!

Oh, Bear Bear! That's crazy. How much fun can you have chasing balls with a muzzle on???

Plus, no one can see your nice smile!
Whoofs & Baroos,
Eddie & Peaches

Mom's stomach is just sick reading this. BSL is a bunch of crap. The thought of you having to be muzzled to go anywhere just makes our blood boil.

Tucker would totally freak if he had to wear a muzzle. :(

I think if this kind of muzzle rule happens where I live, too many pet owner will make big news of disapproval. The muzzle makes me think the dog will bite even if their owner said their not dangerous, not a good message send. Might scare kids. Even kids point at my pup and said she got a face that bites. I think muzzle should depend on the individual owner and if something happen, the owner was warn before hand and any responsibilty will all be pointed to them, instead of forcing every dog owner to put a ugly muzzle on their dog.

Hey come on, this is jut not right lah! So that means ALL dogs must be muzzled even small breeds is it? Actually, harsher rules should be given to the owners NOT the dogs. Yes, I think licensing & micro chipping is a must but not forced to wear muzzles lah! That's just dumb...Eh, Singapore very famous for fining ah?

Bummer. I'm a kitty but this stinks. Smart people know that breed legislation is unfair. My mommy's aunt had 4 rotties and she says that they were so fun and sweet.
Any dog (or cat) will bite if they feel threatened and animals with bad owners feel threatened all the time.
I thnk you look handsome without that muzzle!