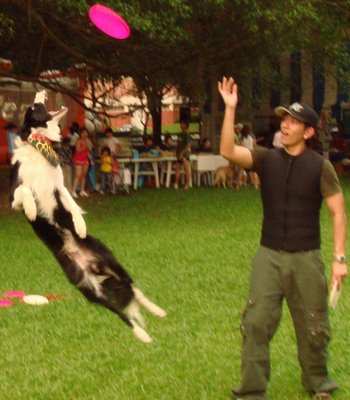 Its WORLD ANIMALS DAY!!! @ Bishan Park
Wasn't exactly the event Pa and me expected... but after getting some inside information for SPCA, Pa realise that SPCA really does have a huge responsibilites and are totally thankless. Absolutely no funding was provided for the charity at all!!! 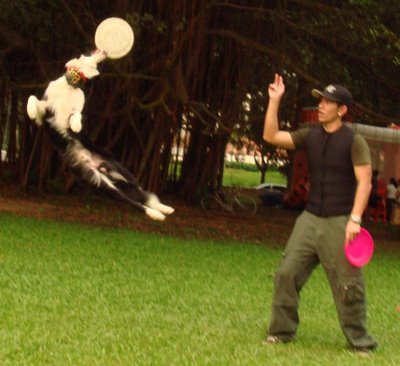 Wow. I wish I could do that....jumping like that....
But its a Carnival...and they even ran out of drinks for sale 2 hours before the event ended.
More could have been done...many people were expecting a whole lot more...but that needs money.
Some people are simply turned off by the fact SPCA has to put dogs down. Sigh.
I did get my ears cleaned as well...and these cute bunnies where getting groomed!! 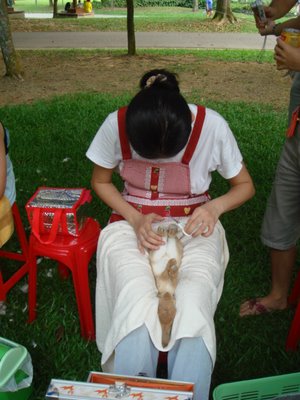 I wonder how the bunny is feeling.

I also met up with GUINESS!! the other Rottie!! She unfortunately has had an accident from home, so her leg wasn't feeling to well.... 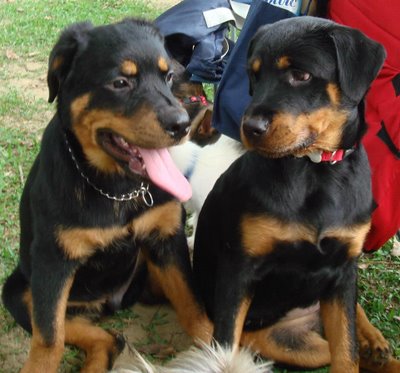 I was telling her to come to the Bishan Dog run more often as it would help her stretch out and socialise better. I think and I hope I will see her more often in the future!! 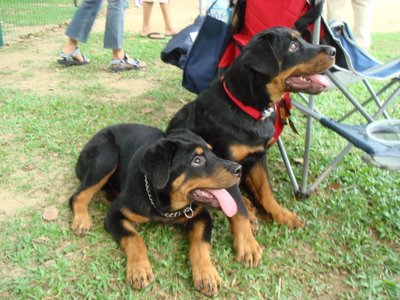 Pa was also bitten by a Japanese Attack / Hunting dog.... an Akita Shiba mix....he'll write more about it later....but he doesn't think he would ever go back to West Coast Park Dog Run again.

Oh you 2 look like lil twins! You need to team up to take on the JRT tag team!

ooooh! that's Bill the frisbee dog! he's my classmate at training (but i hate him because he's smarter than me....shhhhhhhh).

isn't Akita (or its crosses) banned in Singapore? Report the owner!
By the way, when does your rottie need to be muzzled? Poor him... have to get used to being muzzled.

OMG you two rotties look so sweeeeet together! *in love* =)

It looks like you had fun, despite your minor disappointment.

It was nice meeting you Bear... tho you always seemed a little distracted, must be your new rottie friend.