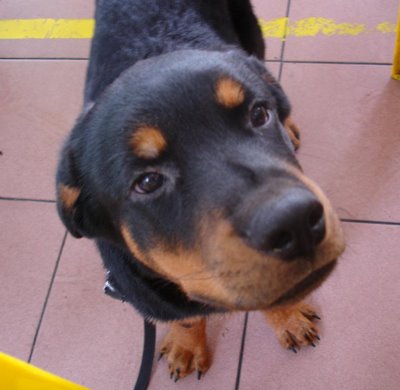 Excuse me... Are you a Rottie?
Went to the Pasir Ris Dog run at Pet movers today... And Boy was it crowded. Pa wan't too pleased with me as i was constant not obeying him....but he shouldn't blame me.... there was simply just too many things distracting me!!
Baileys also managed to join me and he too was amused at the new place and dogs. There was a wading pool for dogs and humans....even sponsored shampoo for a free bath!! i was definately impressed.
i met two other Rotties there...but they weren't very frenly. One even called me fat. FAT. ME!!! That bitch doesn't know what she's talking about.
The other Rottie was about the same age as me....and taller.
but he was thin...to the point of ribs.
and his Pa was saying that he doesn't eat that much at all.... and that he's controlling him anyway and doesn't want him fat.
DOESN'T WANT HIM FAT?? He's just a pup. Feed him. please.
After almost everyone has gone back, Pa took a walk to the Pet movers puppy shop with me.... and there was a whole huge range of puppies. Pa was a little upset just how cramp the puppies were placed in each cage.
Next door to the Dog Run is the Animal Lovers League. Pa was mystified at the Place! The Website isn't really updated...but the place is pretty unreal.
Dogs were roaming freely...but it looked like all of there were toilet trained.
some had only 1 eye and 3 legs. Some were very very badly injured before. Pa said that it took a person that loves animals a lot to start this...not to mention the cost of the operation. 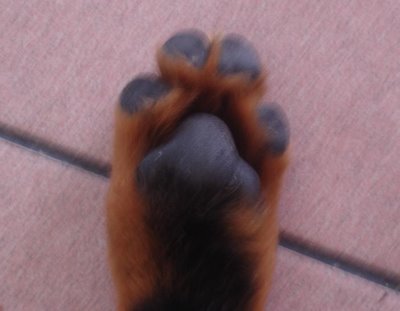 I give them 4 toed salute.
but sometimes, keeping my fellow canines alive just bcause they have a right to live...just prolongs the agony.
at 2:44 AM

Hi Bear Bear, I'm sure you are not fat. Those are only puppy fat and you will lose it in due course.

Thanks for visiting my blog. Yours is great.