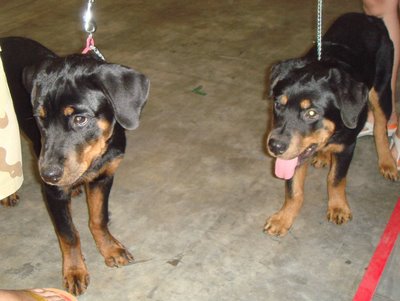 A few more pictures from the Dog Show... This is...ermm...Jack? I'm very bad with names. I met him at the PasirRis Dog Run first before the show. He's about the same age as me but he's taller. I mentioned him in an earlier entry...where his Pa is "controlling his diet" so that he will not be Fat.

I'm happy with my Pa's philosophy of "Feed-until-cannot-eat and Sleep-all-Day-until-play-time." 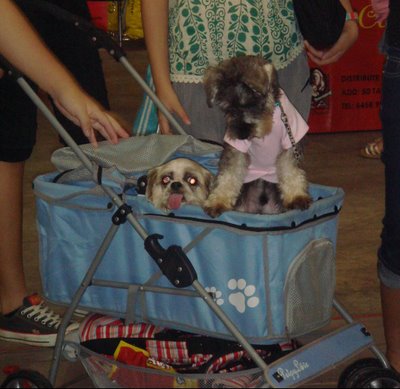 There were all sorts of Dogs at the Dog show. Some came in very unusual means. They weren't allowed to mingle with the rest of the Dogs. I know parents that do not even let their babies walk on the floor...and carry them all the way. This is because apparently the baby would sleep on their beds.

Pa never let me into his room...much less the bed. I wonder why. I've told Pa I really do not mind being carried all the time.

Pa says that its for my own good. He also said that many pampered dogs suffer from muscle atrophy (whatever THAT is) and will be unable to move properly.

I think about my wrestling matches with Jaffe, Angel, Baileys... and I decided that muscle atrophy is not my thing. 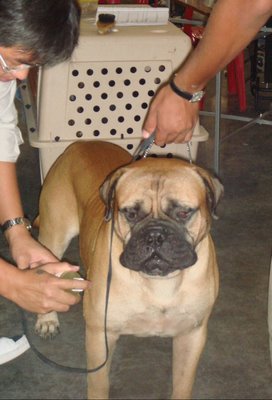 This is a Bull Mastiff. Big Brother Bull was really strong. The owner you can see here is spraying some sort of a scent to make him smell better. I thought he smelt ok already. He was calm, collect and pretty well-behaved compared to the rest of the dogs.

The owner told Pa that when I reach 9 months of age, I must constantly go swimming as it is better than running long distances. I'm still not sure whether I LIKE SWIMMING...but after looking at Brother Bull, I think I would give it another try. 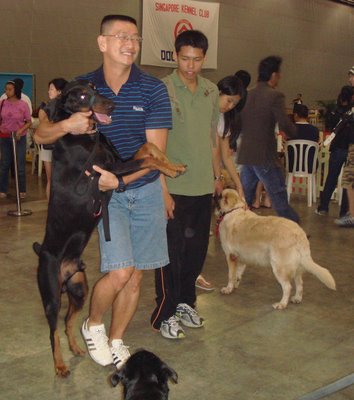 This is a Doberman. And that's me you see at the bottom of the picture. I was fascinated at how badly behaved he was and yet the owner was all smiles!

Ok.. he wasn't that badly behaved...but he kept trying to sit on me. It's something new to me... Maybe I should have nipped him on the rear.

His Pa had to put him on a halter leash...apparently its suppose to be able to control him better. 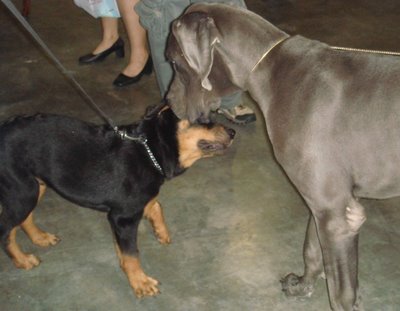 And lastly, there was this grey Great Dane. He reminds me of a very old man with pretty good patience. Wish I had more time to get to know him. But his Pa was pretty strict about who he meets.

That grey dog looks like a weimaraner. A (up to standard) great dane should be much taller and bigger.

Maybe it was the angle of the camera...but that we're pretty sure was a great Dane. He was pretty big.