A lucky or unlucky accident... A gift from Auntie Thiang 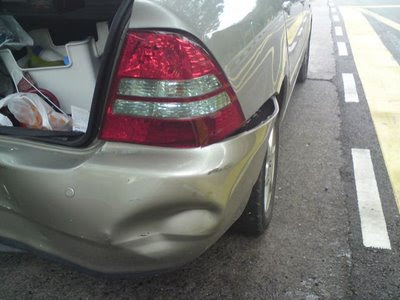 Totally without warning... another car rammed into Pa's car. Pa's car was at a traffic light that was showing red, and basically minding his own business. 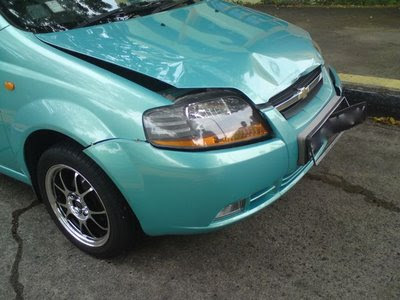 The impact was pretty hard... though it shows that these two cars really are tough little cookies. 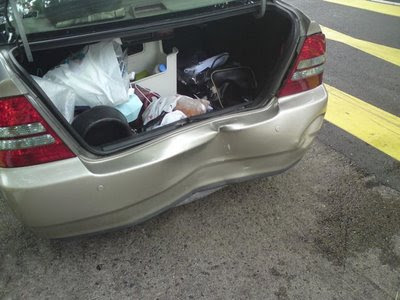 The boot no longer closed but the reverse sensor still works! The driver that rammed Pa from behind ***Pa has asked me to rephrase this but what is wrong with this? I didn't go to school for 9 months to be corrected lor.*** got out... took one look and simply said, "I think its rather obvious just whose fault is this. Lets move the car out of the way." 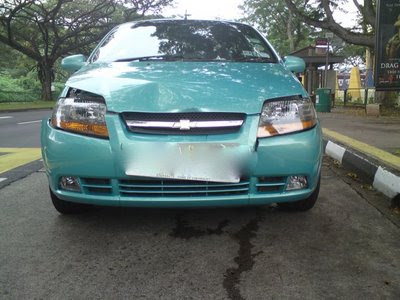 Pa was rather impressed at the fact the other driver was so calm. So the aftermath wasn't that much of an issue. What was really fortunate was that Bruno and myself wasn't in the car! We might have been badly injured as putting on a seat belt isn't that easy...

And the fact that Pa had JUST removed his rather very expensive mountain bike and bike holder from the rear... so those were safe as well! 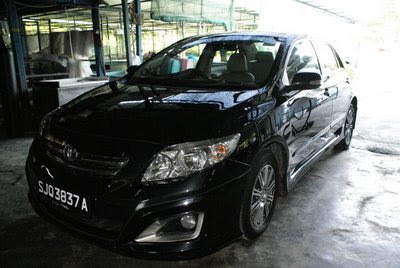 And this is his replacement car as he got his old one repaired... WOOHOO! its another toyota corolla... but this one is very nice. Bruno and me... we had to inspect this new hardware. 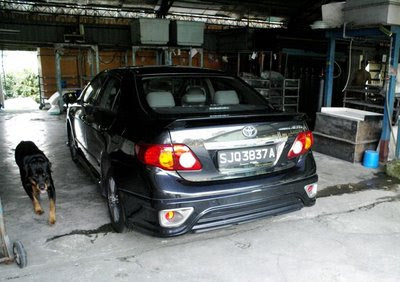 Pa isn't a big fan of spoilers and body kits as it adds weight to the car, making it less fuel efficient... but its a pretty nice looking car nevertheless.... 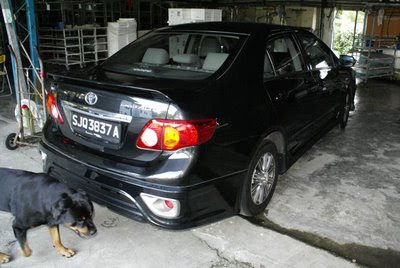 This black dude is quite the head turner actually... Pa did tell the workshop to take their time with the repairs... he doesn't mind driving this little thing for a few days. 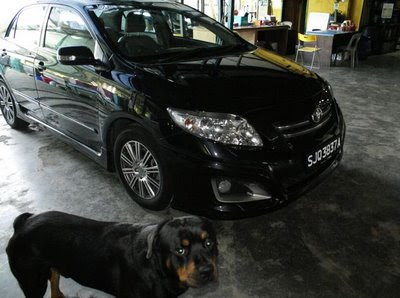 The car is also BRAND NEW... with only about 1000km on its odometer. Cannot really believe that this thing is actually the Corolla on the inside. There is also a Disc player, touch screen and DVD player on the inside panel. 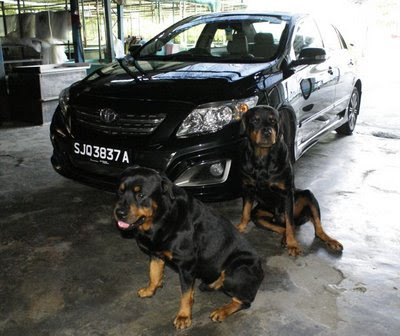 Maybe its time for a new car eh? Black, as impractical a color as it is... is a pretty nice color anyway. 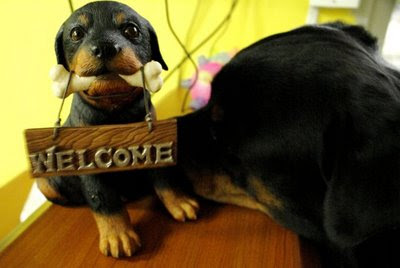 Also thanks to Auntie Thiang for this lovely Welcome Sign! I like it VERY MUCH... a little too much... ermmm.... i'll explain another time.
at 3:50 PM

eyurrrr they look so cute. :( i want to noms them up. HAHAHA!

sorry to hear abt ur car but the new car looks good! haha. enjoy driving it! do bear n bruno shed a lot of fur? haha.

Nice one.. I like how you have presented the information in full detail. Keep up the great work and please stop by my Body Kits site sometime. Keep it up..

Glad everyone is ok and you like your temporary ride. It matches your wonderful coat!!

Daphne> shedding how much is really a relative thing isn't it....

SUV Grille> Why, thank you!

Brownie> I think the car matches us too! But we're still better looking.

The first thought on my mind was whether my big brothers were hurt. I think I'd fly out of godpa's car if there's an accident. Lucky no one's hurt.

Thank DOG you boys weren't in the car. I hope the guys who it your Pa's car paid for the damages because it was clearly his fault. Anybody who hits the back of another person's car is at fault.