Life is Unpredictable... Meeting old ones and knowing new ones./ Murder conviction. 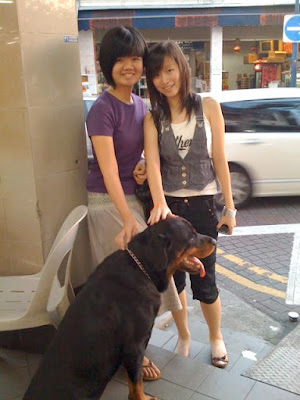 Meet Stella... Pa's ex-student's kid sister. She looks exactly like her older sister though! She recognized Pa instead... and well.. the only thing she remembers is that Pa broke a chair in their house before. 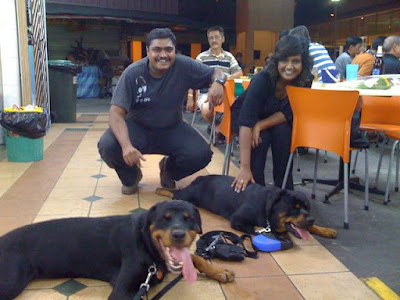 And these are some random strangers that just loved to have us for dinner... muahahahaha! No lah... just that they wanted a Rottie too!

We also actually met Alfie's mummy when we went for SAR training last weekend... Please dun cry anymore... we are very upset over it as well. Next time, you bring us out to East Coast ok? We will protect you from that GS.

Wish we have more things to say... maybe later. Unpredictable life can be... dogs too. Humans worst of all.

SAN FRANCISCO - A woman whose dogs viciously attacked and killed her neighbor in the hallway of their apartment building seven years ago was sentenced Monday to 15 years to life in prison.

Marjorie Knoller was convicted of second-degree murder in the 2001 mauling death of Dianne Whipple, but a judge later reduced the charge to involuntary manslaughter and sentenced her in 2002 to a four-year prison term.

But the California Supreme Court last year said the trial judge was wrong and sent the case back. Last month, Superior Court Judge Charlotte Woolard reinstated the murder conviction, for which Knoller was sentenced Monday.

The case is the California's first murder conviction connected to a dog mauling, prosecutors say.

A Presa Canarios, the breed that was involved in the attack.
The case turned into a tabloid sensation because of the viciousness of the attack _ the dogs tore all of Whipple's clothing from her body and left her with more than 70 bites _ and the seemingly cavalier attitudes of Knoller and her law partner and husband, Robert Noel, who blamed Whipple for the attack.

The couple also said they were keeping the canines on behalf of a white supremacist accused of running an attack dog ring from his state prison cell. The couple eventually adopted the prisoner, Paul "Cornfed" Schneider, as their son.

Knoller, who has served three years in prison, will have to serve 12 more years before she can apply for parole.

In denying Knoller's plea for probation, Woolard noted that Knoller didn't call 911 or otherwise try to help Whipple during the 10-minute attack. The judge said Knoller knew the dogs were dangerous, ignored numerous warnings to train them and hasn't expressed remorse for the attack.

"She has blamed the victim and has held her dogs in higher regard than humans," Woolard said.

Whipple's partner, Sharon Smith, addressed Knoller before she was led off to jail. Smith called Knoller's relationship with the two dogs and the prisoner "perverted" and expressed satisfaction with the lengthy prison sentence.

"It is very hard to find forgiveness for someone who doesn't accept responsibility," Smith said.

I am living proof that the breed needn't dictate the behaviour. I think these humans have got everything they deserve and in my opinion, not enough. They have also done a great injustice to us dogs. Karma. There will be more to pay, if not this life, the next.
at 4:23 PM