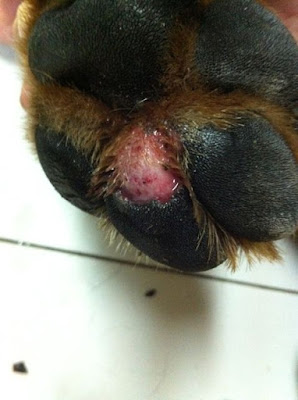 Bruno is all his wisdom, decided that ebraking on rough ground is a good idea. What that achieved really is him limping around for the next few days. The wound had to be treated and cleaned. 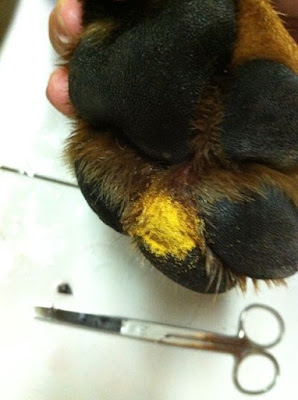 Some bits were hanging out... so Pa went ahead and trimmed the parts that were still attached and isosorb to dry the juicy wound. The black bit down there is part of the parts trimmed. 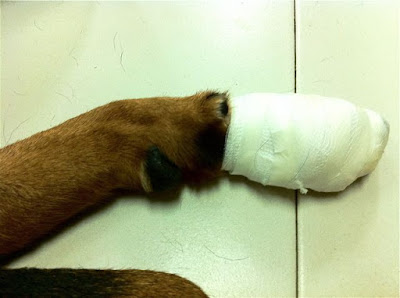 With a little more effort, the wound is dressed and dry... He should be fine after a few more days i hope... he has been really bored. 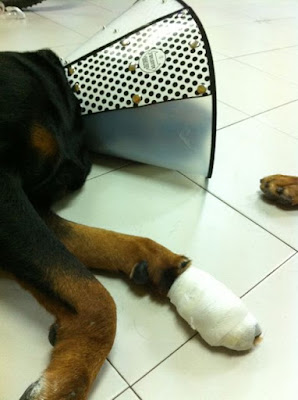 He is so miserable he refuses to have his picture taken. 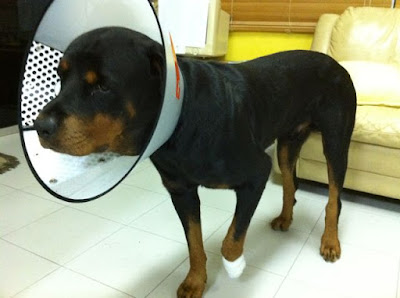 HAHAHA... the Cone of SHAME!
But nothing is as bad as this case...
Man keeps Rottweiler for 2 years in cupboard

A BRUTE who kept his Rottweiler-cross in a cage in a cupboard for two years was banned from keeping animals for life yesterday.

Cruel Tyrone McCalla, 29, also left the dog in a small room for a week when he went on holiday - with just one bowl of food and one of water.

The dog called Rahib could barely walk when rescued - and was hunchbacked with a bent spine.

One rescue worker said it was the worst case she had seen in nine years.

The RSPCA had been called to McCalla's home in Aston, West Midlands, after a tip-off.

Photos taken by inspectors showed two cages, with Rahib in one. The unlit cage was so small the dog could not stand properly and was terribly emaciated. When Rahib was removed by the RSPCA he was overwhelmed by the outside world.

McCalla never took the dog for a walk. But he told Birmingham magistrates he let him out in the laundry room twice a week and shared food with him.

He was convicted of three charges of failing to feed and keep a dog properly.

In an RSPCA interview read out in court, McCalla said he thought the dog was a puppy and was too young to go for a walk.

He told the court: "I treat my puppy the way I want to treat it."

As well as the ban, McCalla was given a three-month curfew.

Speaking afterwards, RSPCA Inspector Herchran Boal said: "When we took the dog from the house he was so overwhelmed by everything, a leaf, grass, a tree. We all had tears in our eyes."

Rahib, now renamed Jet, has a new home and has fully recovered.

It angers me that there are such people around... and that they can blame us instead. No jail time... no big fine. Just a 3 month curfew and a lifetime ban. A little light if you ask me. Look at how Jet looks now. Proud and beautiful. With mental problems? Very likely but not his fault.

Of Bruno! You missed swimming and hanging out with me at TBC! Maybe by this Sunday all will have healed. TK thanks for posting about Jet, what a sad story.

Of Bruno! You missed swimming and hanging out with me at TBC! Maybe by this Sunday all will have healed. TK thanks for posting about Jet, what a sad story.