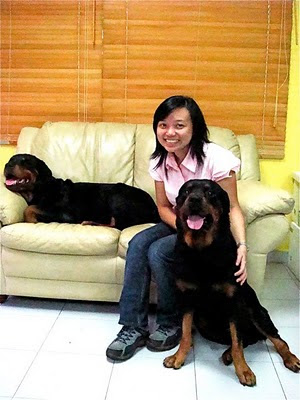 An old friend of Pa, Auntie Emma had rotties of her own and for the last few years, she has been dying to meet us... and at last, without really being prepared for it, we were visited by her! She could only stay a few hours, less than a day in Singapore, before running back to her hometown of KL Malaysia. She totally loved us of course. 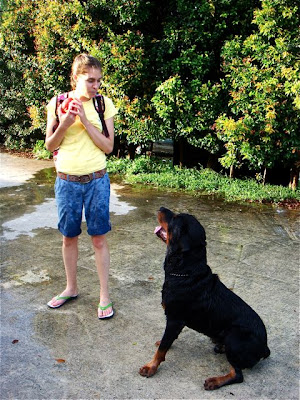 And here is Auntie Sydnie! She has been following my blog even from the US of A and she too managed to meet up with us for a swim session! She wants a Rottie so badly that it was put in the lease contract that a Rottie if she gets one... will be allowed! Too bad Bruno and myself are male. 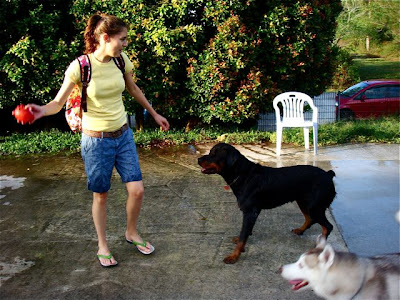 Good luck Auntie Sydnie! There are many dogs available for adoption! Let us know when and we will accompany you to meet those dogs. 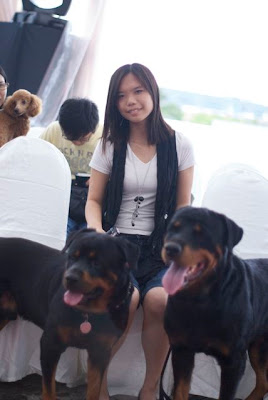 Guess where we are! We are about to embark on a Blog first and probably Singapore's first Pets Runway 2010 at the rooftop of the Chevy building in Ubi! 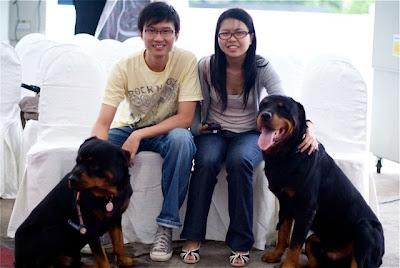 Needless to say, we were probably the biggest dogs there... but everyone totally dig us! 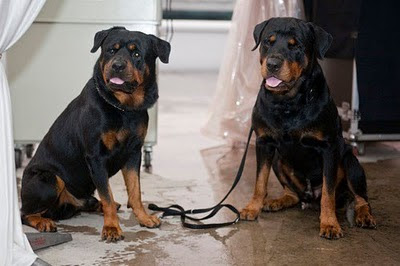 It was a wee-bit rainy up there... but we are rotties... and not water-soluble. A little water is not a problem for us... in fact... 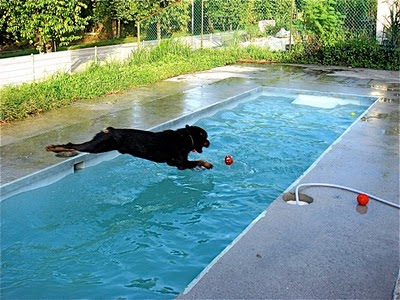 A lot of water is also fine with us. But I digress.... 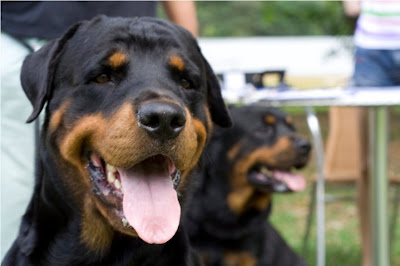 So how did we end up on the red carpet? Well, it begin with an audition conducted at the Bishan Dog Run a few weeks ago. Bruno and I decided we were great catwalk models. 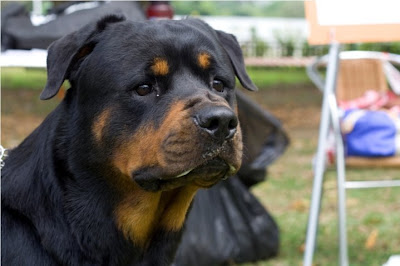 We put on our best stoned faces and did our stuff in front of the selectors and... well... 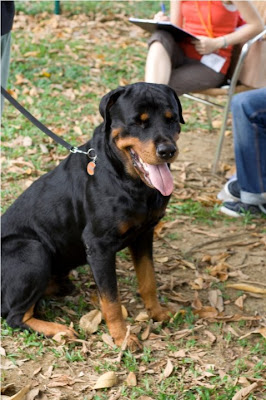 Bruno got distracted as usual and practically dragged the walker when he went to the tables and other dogs. She was a tiny little thing. 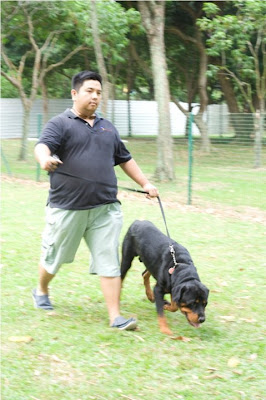 Pa obviously didn't have an issue, but seriously, Pa couldn't become the catwalk model even if his life depended on it... we are all beautiful in our own special ways i suppose. 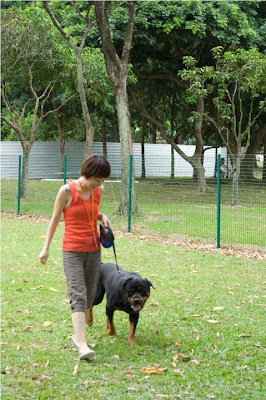 I of course did very well and was selected to be one of the selected few on the red carpet!

Watch the clip here! You can see Bruno dragging the poor girl around! 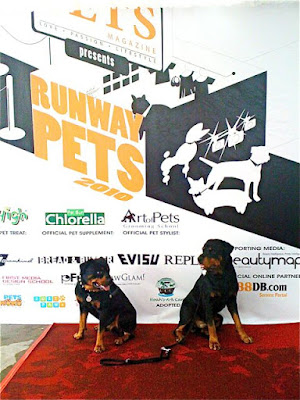 HERE WE ARE! ON THE RED CARPET!!! I wonder when would I be asked for my first pawtograph. Uncle RUOK just had his! 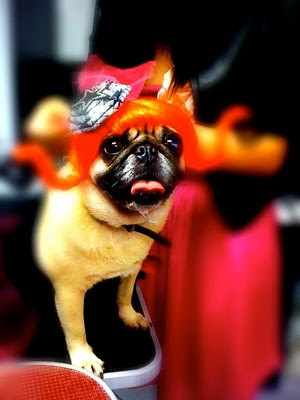 Everyone was really anxious backstage and was dressing up to their best! Whatever you call it, its darn cute. 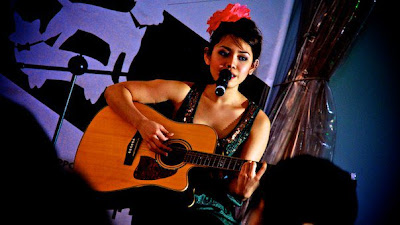 We had some light entertainment by our own Singapore Idol finalist, she was pretty good.... 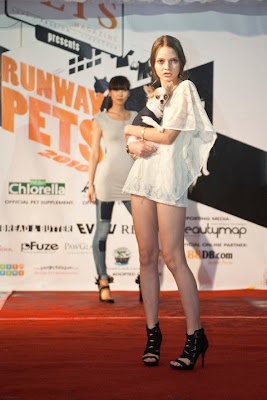 After which it was the MAIN EVENT! The models were ALL SO GOOD LOOKING. Almost as good looking as us pooches... OK fine... they were really nice HUMAN specimens. 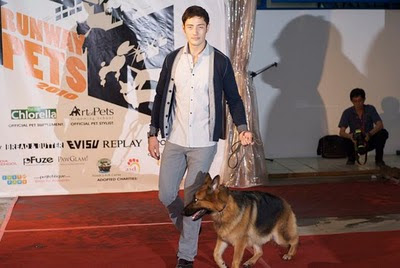 Where was Bruno in all of this chaos? 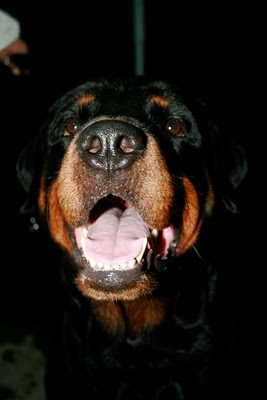 Auntie Sydnie managed to take a picture of his face as he eagerly waits for me to come out... Apparently, when my name was called out, He perked up and quickly strained to see where I was coming out. 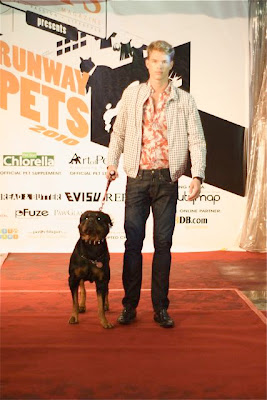 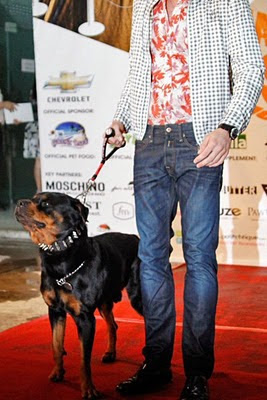 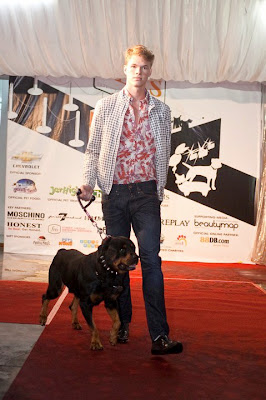 One of the last dogs to appear, according to general opinion, I did very very well. I kept my head high and walked with a nice trot. 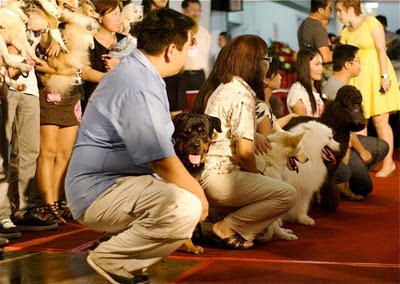 After the event, it was just simply a real bash. We had free food and treats... and i even came in 3rd in the popularity contest for the dogs! IMAGINE THAT! 3rd!!! 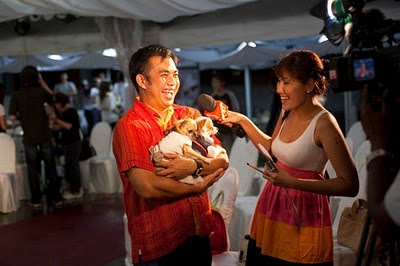 Everyone left really happy, some were interviewed and generally the entire event was a huge success! 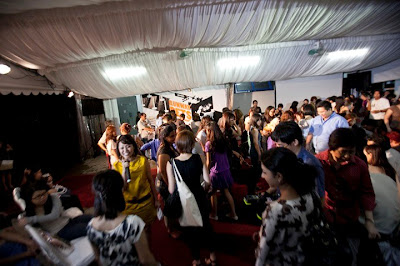 I do have something to admit though... most of these pictures in this entire blog entry was NOT taken by Pa and little or no permission was sort after to have them published. I hope you guys had fun looking at the pictures!

I appear at 3:45! you can see more Razor TV clips on their site. The collar is mine really... its the spiked collar i got from some time ago... Had the chance to at last wear it!
at 4:27 PM

Bear Bear, we are SO PROUD OF YOU!
You gave rotties such a great name and of course you looked even more beautiful than that model :)
I'm sure your Pa is really proud of you.

Thanks for adding the lovely pictures! I can't wait to go back to the swim park! Bruno and Bear I hope you are ready.

Lisa and I voted for Bear at the runway show. He was by far the best looking and most talented dog there!

hello there, oh my! i just got back from Taipei and i saw Bear's video! i am loving it, Bear you got the loudest cheer from the audience, you heard that? so very please to have met you and your Pa :) emma