Came across an interesting article before i i did my business on the papers...

Allergies and obesity are reducing the life expectancy of Lassies and Mittens nourished worldwide on industrial foodstuffs, said Gerard Lippert, a Belgian acupuncturist for animals who has just completed a study on the diets of 600 dead dogs.

"Pets, like humans, are victims of junk food," he told AFP.

Of the 600 furry corpses he examined "those fed on processed foods died three years earlier than those fed on food made in the home."

Dogs, he added, "originally were omnivores who shared their food with humans."

Rippert said he was increasingly called on to heal skin, motor and digestive problems as acupuncture was an all-embracing method enabling work on practically all organs.

"We don't know the origin of the proteins in the foods," he added. "And there's an excessive amount of cereal, often genetically modified, and very little vegetables."

"We're turning our dogs and cats into ruminants," he said.

Laurence Colliard, a veterinary surgeon and nutritionist located in the Paris suburbs, estimates that only five percent of French pet-owners cook food for their four-legged companions.

France is Europe's top pet nation -- with 7.8 million dogs and 10.7 million cats, according to a 2008 study by the Sofres/Facco polling institute.

Pa has always believed this! That dry food is really bad in a way that its way too good for us. Rather than what the articles says of having too few vits and no nutritional value.

But rather its really JUST too rich for us... too much of the good stuff.

And in reference to only dog owners that understand... the amount of poo we produce is a lot less when we are on fresh food in comparison to if we were on Dry food. Pa believes this has to be due to the absorption rate. Too much of a good thing and we poo everything out anyway.

However, perhaps they should have gotten more professionals to comment on this, maybe Vets who are sometimes in part clients of big dry food companies, wouldn't wanna comment... but getting a holistic healer doesn't inspire a very balanced point of view. 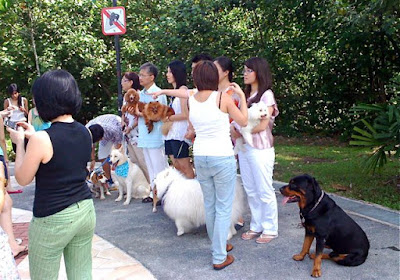 Next up would be my photo session with Pets Magazine! It was a bloomingly hot day... but well worth it! remember to pick up your next pet's magazine to catch me on the runway and a photo spread!
at 8:09 PM

Nice ideas, both pros and cons can be given on this topic, but I believe that our little companions (dogs and cats as well) should eat diversified food each day, like we, humans do (or at least most of us do :)).
Have a nice day