Another step back for Rottweilers. 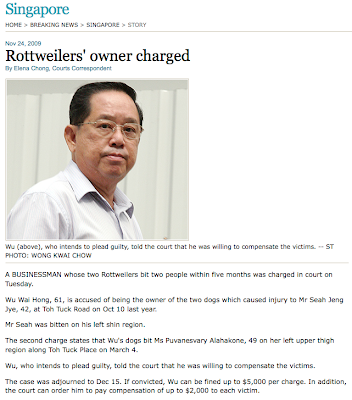 A BUSINESSMAN whose two Rottweilers bit two people within five months was charged in court on Tuesday.

Wu Wai Hong, 61, is accused of being the owner of the two dogs which caused injury to Mr Seah Jeng Jye, 42, at Toh Tuck Road on Oct 10 last year.

Mr Seah was bitten on his left shin region.

Wu, who intends to plead guilty, told the court that he was willing to compensate the victims.

The case was adjourned to Dec 15. If convicted, Wu can be fined up to $5,000 per charge. In addition, the court can order him to pay compensation of up to $2,000 to each victim.

Sometimes... I really do not know what to say. What exactly happened? Many details were not provided in the article. 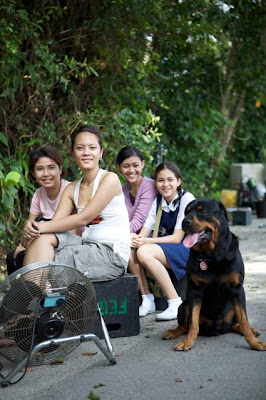 However, a picture is worth a thousand words. Hopefully our work would help lift so many misconceptions about our breed. I think this is worth working for. I do hope that people would eventually come to us to talk to us about our side of the story.
at 3:20 PM

hi from what i know and heard, but do not know how true, the 2 dogs are kept in cages the entire day. live in that area and have never seen the dogs out for walks and quite some neghbours do not even know of their existence until the recent incident. during the incident, the house was under renovation and the dogs must have busted out of their cages.

Hello! That is a very sad story if its true. As always, this sort of situations always reflects back to the owner and how the dogs are treated.