A cute Stray / A missing Bruno 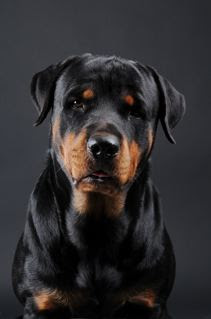 Have you seen this DOG?
Bruno... has gone missing. That bloody moron rain out to play with other dogs and forgot how to get home.

He was spotted at the traffic lights by many people... and another saw him walking towards the private estates neaby.

At about 1am, he was arrested and brought to the police station for loitering without an owner. 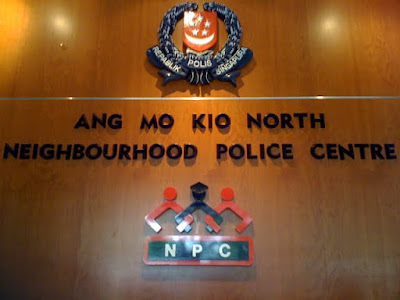 Pa had to go bail him out the next day. Unfortunately... no cameras were allowed... and Pa had to draw out how he looked liked. 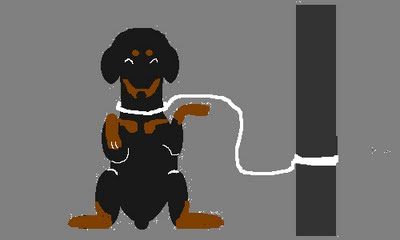 They had a couple of doggy cages but NONE could fit him. So they had to use the flexible cuffs they use on felons to put round Bruno's neck. That was also the only thing that could fit him. He was stuck in other people's carpark for a WHOLE night.

Bruno was saved by some kind soul. Thanks a lot to whoever it is! The SPCA kindly assisted Pa in his search the next day. Auntie Shanti and Auntie Anna from SPCA ignored proper procedures and just wanted Pa to get that little brat back.

The Police Officers were all in good humor and they were in awe of his size. Most were wondering if he would bite. After Pa explained, most were put at ease. Thank you Sergeant Loy! He was MOST understanding. 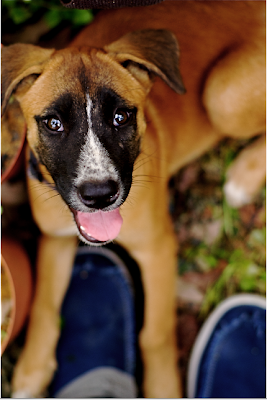 This little ill mannered darling sat on Pa's foot as Pa was trying to work. She refused to move anywhere else. 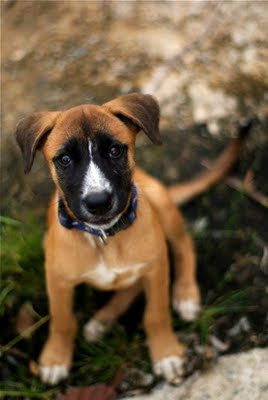 I really do like her colors. And she's a feisty little one. She's still a playful pup. Should we get her a new nice home? She does seem happy running around free... But I think she wants some real attention too.
at 12:38 PM

Bruno don't have any ID tag on him?

Time to get one. Yes?

Bruno has a Microchip embedded underneath his skin.

Better than an ID tag.

Oh wow, what an experience for Bruno.. don't ever ran out of house again Bruno! Noti Noti..

Hi, i'm just a fan of your blog. It shocked me when the post is entitled: "a cute stray/a missing bruno" I thought he've gone missing and hasn't come back! Haw. Nice blog!

Kinda confused. So Bruno is your (big) dog that ran amok and rescued by the police, and that lil darling is a cute stray wondered into your path?

That stray has got some taste and, yes, luck.

Thanks for dropping by. Yes he is a very very naughty boy. But it seems that he learnt his lesson. The gate was left open but he didn't run out this time... he just went to pee and went back inside.

I think he had a great big adventure with the roads and cars when he disappeared.

Microchip is better only if the police have a reader with them.

Sometimes it's just easier to stick to the good old fashion dog-tag.

You also much prefer to go about naked if you are at your own home and room yes?

Hi again! Do you guys go down to Pasir Ris' Pet Movers' Dogrun? Dew will be down every Sunday! Hope to see you guys there! :)

Kade> well, most of the time we would actually be at Petgamart's little swimming pool... you can come over if you wanna as well!

Uhooo! BUT. I got no transport, hahaha! Come down to the dogrun some day luh, it's only a few kilometres away! :P

Awww! glad bear is back home safe and sound... and yes, that cute baby looks like it needs a luvin' home!

haha...ops. I can't help imagining your daddy disappointing look when he get refused his DC inside and that bruno illustration...I can picture the scene ^^

Hello Maltesam! thanks for commenting! but we can't see who you are!

Was it last Tue's evening? I thought I saw a big dog running across the field (just outside FV Pri Sch) towards some kids playing soccer. I was on the bus home but couldn't be sure if it was him. He looked really happy (tail wagging) as he moved towards those kids.

If it's him, then he's a real cheeky, playful fella!

Oh my goodness... that LITTLE BRAT! I hope he didn't scare anyone.

What an adventure, and all this while godpa was away from home. He ran off for a vacation :|