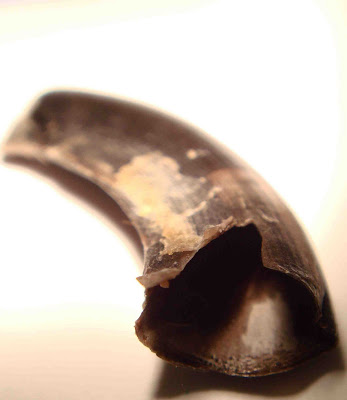 No... this is not some plant 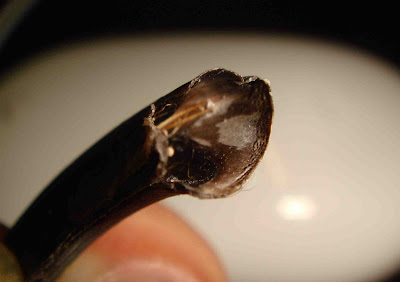 Or some Clove seed. Its actually Bruno's Dew Claw. That's right... it broke off. It was REALLY very long as it has not been trimmed for a long time. And then it broke off... but the good news is that the new nail is already growing out.

I really wanted Pa to go to the vet at first... But seeing how it was already almost out, Pa just sat him down and removed the whole thing, put some anti-septic cream and now it is good as new.

Cool eh? something to keep under the computer. Its a little stinky though.
at 12:57 PM

Oooowww!!! That has got to hurt badly... Is the flesh exposed? Oh my, I can already feel the pain. The nails better be trimmed regularly now. Faith's nails have been neglected for too long too but mommy does cut them every three weeks or so. Lazy mommy!