2 more Rottie Attacks just to finish up the Year 2007

Unbelievable. 2 more attacks around the world... just in time to finish up the year. How on earth did this happen?

I really hope that this is the last I hear of the Singh family. I hope they learn to isolate the dogs separately and spend more time with them. That would be the best Christmas present ever. 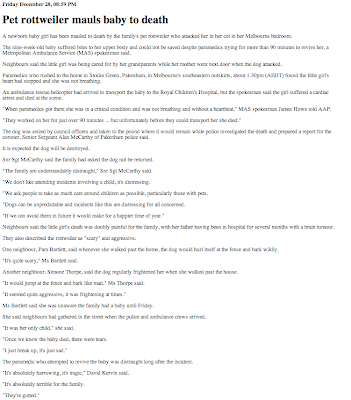 A newborn baby girl has been mauled to death by the family's pet rottweiler who attacked her in her cot in her Melbourne bedroom.

The nine-week-old baby suffered bites to her upper body and could not be saved despite paramedics trying for more than 90 minutes to revive her, a Metropolitan Ambulance Service (MAS) spokesman said.

Neighbours said the little girl was being cared for by her grandparents while her mother went next door when the dog attacked.

Paramedics who rushed to the home in Stocks Green, Pakenham, in Melbourne's southeastern outskirts, about 1.30pm (AEDT) found the little girl's heart had stopped and she was not breathing.

An ambulance rescue helicopter had arrived to transport the baby to the Royal Children's Hospital, but the spokesman said the girl suffered a cardiac arrest and died at the scene.

"When paramedics got there she was in a critical condition and was not breathing and without a heartbeat," MAS spokesman James Howe told AAP.

"They worked on her for just over 90 minutes ... but unfortunately before they could transport her she died."

The dog was seized by council officers and taken to the pound where it would remain while police investigated the death and prepared a report for the coroner, Senior Sergeant Alan McCarthy of Pakenham police said.

It is expected the dog will be destroyed.

Snr Sgt McCarthy said the family had asked the dog not be returned.

"We don't like attending incidents involving a child, it's distressing.

"We ask people to take as much care around children as possible, particularly those with pets.

"Dogs can be unpredictable and incidents like this are distressing for all concerned.

"If we can avoid them in future it would make for a happier time of year."

Neighbours said the little girl's death was doubly painful for the family, with her father having been in hospital for several months with a brain tumour.

They also described the rottweiler as "scary" and aggressive.

One neighbour, Pam Bartlett, said whenever she walked past the home, the dog would hurl itself at the fence and bark wildly.

"It's quite scary," Ms Bartlett said.

Another neighbour, Simone Thorpe, said the dog regularly frightened her when she walked past the house.

"It would jump at the fence and bark like mad," Ms Thorpe said.

"It seemed quite aggressive, it was frightening at times."

Ms Bartlett said she was unaware the family had a baby until Friday.

She said neighbours had gathered in the street when the police and ambulance crews arrived.

"It was her only child," she said.

"Once we knew the baby died, there were tears.

The paramedic who attempted to revive the baby was distraught long after the incident.

"It's absolutely terrible for the family. 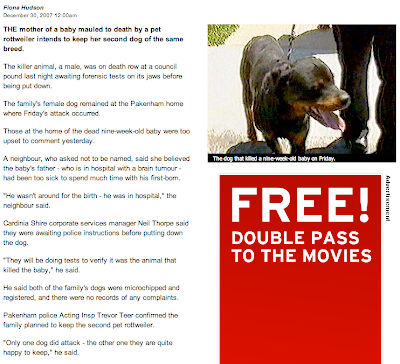 THE mother of a baby mauled to death by a pet rottweiler intends to keep her second dog of the same breed.

The killer animal, a male, was on death row at a council pound last night awaiting forensic tests on its jaws before being put down.

The family's female dog remained at the Pakenham home where Friday's attack occurred.

Those at the home of the dead nine-week-old baby were too upset to comment yesterday.

A neighbour, who asked not to be named, said she believed the baby's father - who is in hospital with a brain tumour - had been too sick to spend much time with his first-born.

"He wasn't around for the birth - he was in hospital," the neighbour said.

"They will be doing tests to verify it was the animal that killed the baby," he said.

He said both of the family's dogs were microchipped and registered, and there were no records of any complaints.

"Only one dog did attack - the other one they are quite happy to keep," he said.

This to me, isn't the best thing to do at all. More about why I say this in a while.

Dear All, obviously there is that common misunderstanding about Dogs and Rotties specifically.

Lets deal with some facts.

1. Rotties are Medium-Large dogs that can range between 35-50kgs. Some of you do not even weight that much.

2. Rotties are specifically 1 owner dogs. Rehoming is not an impossibility, but i would say its pretty tough.

3. Rotties are graded to the the number 8 in Intelligence in the doggy breed world (among 100s others.)

4. The media rarely get it right.

I will tell you what I told the Radio Deejays Flying Dutchman and Glenn Ong. For every 1 Rottie that attacks, there are 1000's others involved in Search and Rescue, Therapy and protection work.

Rotties are GREAT family pets but they need to be constantly challenged. 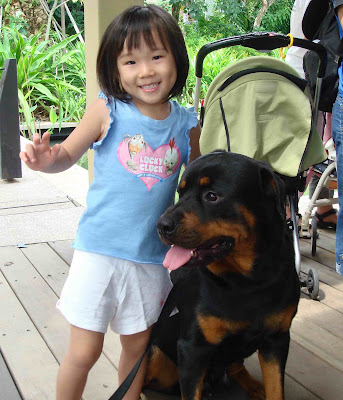 With a bite force of over 320pounds, they have the power to break through bones with a single snap, and with a body of muscle, drag criminals or victims alike to safety.

Now... you know a little about Rotties. They aren't mad. like a human being, they have a temper and they are very specific about pack order.

In both of the newspaper articles, it is very clear that it is the humans at fault. And this is coming from not KNOWING the family.

This shows poor upbringing as well as poor socialization skills. Made doubly worst due to size. The family was also reclusive as their neighbours didn't EVEN know that the family had a pregnant member.

The Alpha of the family was also sick with a brain tumor. Unfortunately they decided to keep the female rottie of the two, as she would probably be looking at the male as the alpha. And with the Alpha gone, she might think she's top bitch of the house. 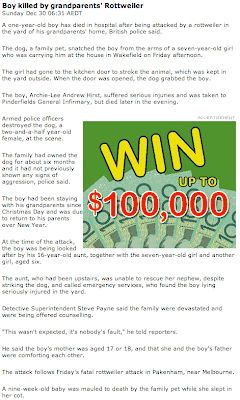 Boy killed by grandparents' Rottweiler
Sunday Dec 30 06:31 AEDT
A one-year-old boy has died in hospital after being attacked by a rottweiler in the yard of his grandparents' home, British police said.

The dog, a family pet, snatched the boy from the arms of a seven-year-old girl who was carrying him at the house in Wakefield on Friday afternoon.

The girl had gone to the kitchen door to stroke the animal, which was kept in the yard outside. When the door was opened, the dog grabbed the boy.

The boy, Archie-Lee Andrew Hirst, suffered serious injuries and was taken to Pinderfields General Infirmary, but died later in the evening.

Armed police officers destroyed the dog, a two-and-a-half year-old female, at the scene.

The family had owned the dog for about six months and it had not previously shown any signs of aggression, police said.

The boy had been staying with his grandparents since Christmas Day and was due to return to his parents over New Year.

At the time of the attack, the boy was being looked after by his 16-year-old aunt, together with the seven-year-old girl and another girl, aged six.

The aunt, who had been upstairs, was unable to rescue her nephew, despite striking the dog, and called emergency services, who found the boy lying seriously injured in the yard.

Detective Superintendent Steve Payne said the family were devastated and were being offered counselling.

"This wasn't expected, it's nobody's fault," he told reporters.

He said the boy's mother was aged 17 or 18, and that she and the boy's father were comforting each other.

A nine-week-old baby was mauled to death by the family pet while she slept in her cot.

Article two 30th Dec "Boy killed by grandparents' Rottweiler" had the fact the boy's mother was aged only 17 OR 18!!! I think she has a problem taking care of herself.

The dog was a 2.5 year old bitch and the family had the dog only for 6months!

Do the math. The dog had a previous owner. Remember the 1 owner dog bit?

Like Husky attacks girl in Sentosa, all these events might have happened to any breed. I currently have Bruno in my office and we're are getting along with each other handsomely much to everyone's surprise.

Sure sometimes we argue over Pa's affections... BUT Rotties are NOT aggressive. Owners either train them to be whether they mean to or not. Bruno is currently only 1 year old. Given the fact he was imported, his owner only had about 7-9months with him, and Pa's confident that he would be able to take over the alpha role.

As it is, he is already out there meeting people and trying to get them to change their perspective.

It might be just me, but I'm figuring that he is getting more attention than I am. And I am miffed. 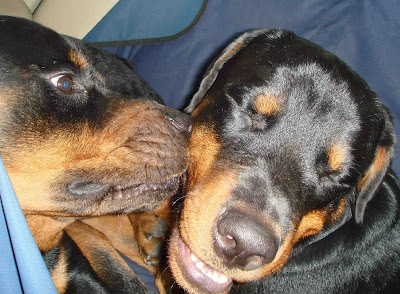 Does this look to you like aggressive dogs? Here I am considerately giving him a facial in Pa's car no less! He seems very much like he's enjoying it. 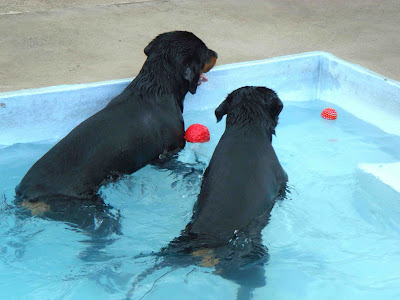 We're also making regular trips to the pool! Do you know which one am I? He likes Balls too. I just wish he wouldn't keep playing with mine. 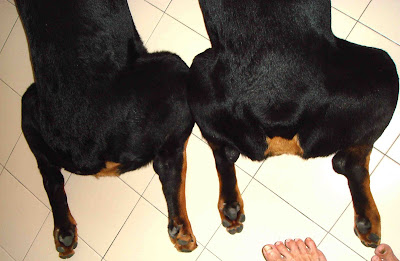 Can you tell which butt is mine? I can. And mine is definitely cuter. Really really.
at 11:39 AM

Hi Bear Bear, I have to say it is kind of sad reading about the Rottie attacks.
Some pinkies shouldn't be allowed to own any breed of dog let alone a dog that is smarter than them.

Too sad.
Miss Ellie - the Superdale.