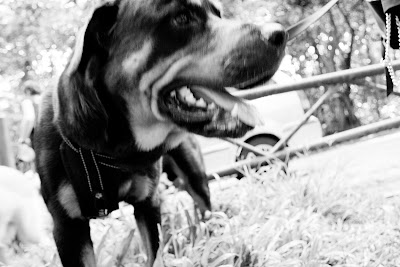 This is the final installment of the Dog Hash Pictures Feb 2007. Here I am looking great.

This is Princess, looking mighty proud of herself. She was the smart dog...she took a short cut and saved a whole lot of running around. 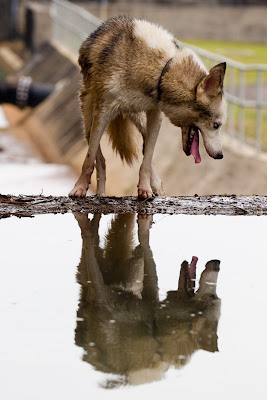 What you do not see is HOW Uncle John risked life and limb to take this particular shot!
When Princess "walked" into the water, the water with all the settled muck looked very shallow. Princess then climbed up onto the ledge you see here and posed. Uncle John sensing a great opportunity ran down the bridge we were standing on to the bottom, next to the water you see here.
Uncle John leaned out as far as he could and snapped away.
After a few shots, Uncle John decided he wanted another angle of Princess and proceeded to take his shoes off.
Pa was on the bridge jeering at him...
"John! just walk in with your shoes! Dun be a pussy!"
Uncle John wisely ignored Pa and took of his socks as well. With his Canon DSLR and a $1.2k lens, Uncle John took the first tentative step into the "shallow water."
Must to his surprise...and Pa's, he never felt the bottom...just after 1 step! Uncle John's first thought was to save his camera, and so he raised it above his head and at the very last moment, threw his camera onto dry land.
What looked like just 50-60cm of water was at least over 2 meters deep.
Uncle John after that pulled himself out of the water and Pa even took off his top to let Uncle John use it as a towel... As Uncle John was frantically drying his camera, Pa said...
"Well, that was certainly unexpected. But look on the bright side...
...At least your shoes are dry."
at 2:31 PM

That photo of princess is great.

UUUGHHH I cannot imagine what could have become of Uncle John's precious camera if it went into the water!! Shucks. That was a close shave. Phew~~