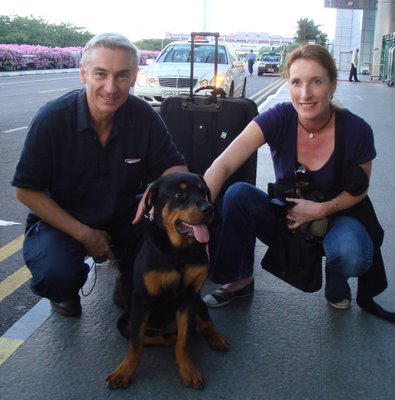 Say hi to my friends from France!
These are my Pa's friends from France... and Pa is very close to the entire family! Not with Jerome and Brigitte are their 3 kids Bruce, Robin and Lou. They will be coming again soon to Singapore and I cannot wait to meet them!!
Uncle Jerome told Pa that my name is ACTUALLY FRENCH! How cool is that? Bear Bear can be pronounced as Bébert...which basically sounds almost the same... but a stronger emphasis on a 'T' sound right at the end!
Its a French nickname! And when Pa introduced me at first, both of them thought Pa said Bébert instead of Bear Bear... and thought it was extremely cute! Actually Pa doesn't know much French other from the Oui, Non... Bonjour... and of course.... Excusez-moi, je ne parle pas français, Voulez vous coucher avec moi ce soir?
So Bébert is definately beyond Pa...
What do you guys think? Maybe I should change my name? Its still sounds the same...just fancier!
at 12:01 PM

I like Bear Bear. It suits you lil big guy.

Are they gonna cook French stuff for you?

Pretty cool name either way. Hope your friends enjoy their stay with you.

My name is Monty. My mom thinks you're as cute as pumpkin pie & was wondering when you actually go down to Bishan Park 'coz we've never seen you there.

So we're missing each other by about 2 hours each day.

We'll trying to go later and hopefully we'll see you soon too!