Last night, I met up with Max, a 4 year old Rottie with his new Pa, Patrick and human son.
Patrick met my Pa at the park one day when Pa was bringing me to the park... and that became emails between them.
Patrick had never a big dog before and he adopted Max... so basically he needed some advise. Rotties being 1 owner dogs are placed in a unusually stressful situation when being re-homed.
Pa was with Max last night leaving me to play with my friends... and the other Pa's and Mummy's were understandably upset.
Max looked like Hannibal with that muzzle on.
For a 4 year old Rottie that does not socialise, Max was amazingly well-behaved. He wanted to join in the rest to play...I can tell from the whining sounds he makes... but unfortunately he doesn't know how to play yet.
Patrick only adopted Max for over 1 month... so really there is a long long way to go. But sincerely, Max's temprement is good and I have extremely high hopes that one day he will be great at a dog run.
After everyone left that day, Max was let into the Dog run with me un-muzzled and just as Pa thought, it was really not a problem. Max was just so excited that he was even out... according to Patrick Pa, he was so tired he laid down for a very long time when he got home. He was even very still in the car when this was his first time in one!!
With that note... I would like to talk about....
Dog Fighting and how to break one up

Recently there was a couple of rather serious dog fights in the Dog Run.
Pa was never personally there but he thinks it is important to educate the Pa's and Mom's on how to break up two dogs fighting... and how not to get hurt while doing it.
www.leerburg.com
This is the site Pa has found rather useful tips on especially how to deal with big strong working dogs. Not only for Rotties or German Shepherds... or other police dogs, but rather ALL big dogs... and that includes Golden Retrievers, Labs etc.
When dogs fight, it is never a good thing.
Unless you have a lot of experience, do not try to break up a dog fight by yourself. Never step in the middle of two loving pets and try to grab them by the collar to stop a dog fight.
Chances of being bitten yourself are extremely high.
http://www.leerburg.com/dogfight.htm
The safest way to break up a dog fight is with 2 people.
Each person grabs the back leg of each dog like a wheelbarrow. Then pull them apart.
Slowly then turn in a circle until both dogs are facing away from each other while backing away from the other dog. This stops the dog from curling and coming back and biting the person holding their legs.
By circling the dog has to sidestep with its front feet or it will fall on its chin. One of the dogs needs to be dragged into an enclosure before releasing.
remember....


You can visit his site to take a look just how badly injured you can get if you get inbetween two dogs without knowing what to do. Trying to pry open another dogs mouth and hitting with a branch is definately not the answer. 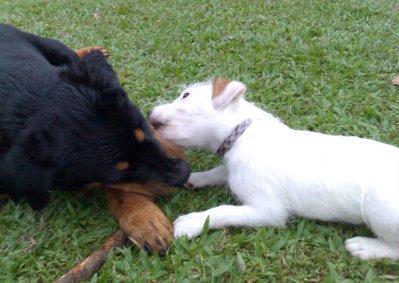 The Best thing is of course...make love...not fights. Whats wrong with sharing? 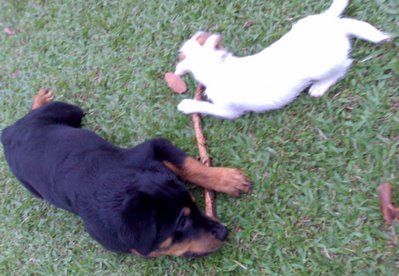 By the way, for those who are keeping track, I'm almost 19kg.

Mummy says can't you just do the last one. Not very good at this sort of thing is she.

Bear you are a growing machine! And, obviously, a love machine.