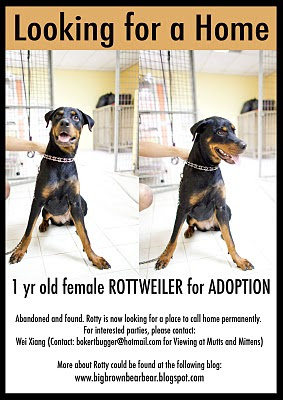 TOLEDO (Ohio) - A GERMAN shepherd named Sarge is one tough pup.
A dog warden in the state of Ohio says the dog was shot six times and survived. Witnesses tell police in Toledo that the dog's owner and another man took turns shooting the dog with a pistol while he howled in his cage.
Lucas County dog warden Julie Lyle says Sarge was shot in his head, neck and chest. Ms Lyle says the bullets remain lodged inside the dog and that he doesn't need special care other than pain medicine and antibiotics. She says Sarge was up around Tuesday, eating and drinking.
The dog's owner is due in court next week on charges of cruelty to animals and discharging a firearm. He told officers that the dog had bitten him and that he was dangerous.
The other man pleaded no contest on Monday. -- AP

Sometimes the will to live can be so strong that against all odds we will survive.

MACUNGIE (Pennsylvania) - A VETERINARIAN says a dog trapped in a car on a 90-degree Fahrenheit (32-degree Celsius) day in eastern Pennsylvania honked the horn until he was rescued.

Nancy Soares says the chocolate Labrador was brought to her Macungie Animal Hospital last month after he had been in the car for about an hour.

She says Max's owner had gone shopping and was unloading packages when she returned but forgot that Max was still in the car. She later heard the horn honking and looked outside several times but saw nothing amiss. Finally, she went outside and saw Max sitting in the driver's seat, honking the horn.

Ms Soares says the owner immediately gave Max cold water to drink and wet him down with towels before rushing him to the clinic.

Ms Soares says Max was very warm and panting heavily but had suffered no serious injuries, only heat exhaustion. -- AP 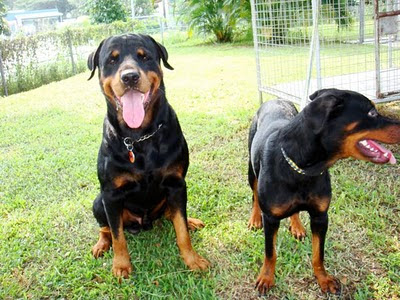 Bruno and I visited Rotty at Mutts and Mittens... She was really great and friendly. Extremely high spirited as well. She really just needs a firm handler to get her trained. I can see she's really quite smart. 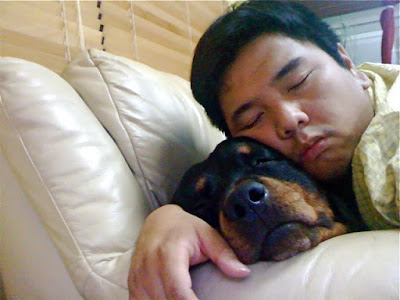 All she needs is a place called home. Help spread the word. She really needs all that she can get.
at 1:06 PM

you guys... have the same expression...