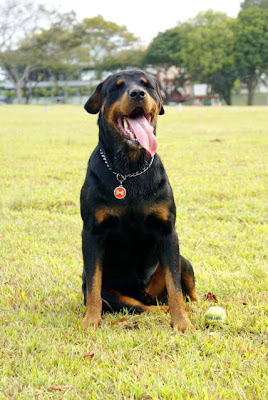 53,000 licensed dogs in Singapore, or about 40,000. If this is right, then they actually bite less than their population would suggest.

There are about 323 licensed rottweilers and 300 German shepherds here.

While the number of biting incidents involving small dogs has been going up, such bites are far less likely to cause the damage that a bite from a medium-sized or large dog would cause.

Veterinarian Wendy Chee, 27, from the James Tan Veterinary Hospital said: “The muscular power and strength of a bigger dog’s jaw and size of its teeth mean that its bite could cause much deeper wounds than a small dog’s.”

Professional trainer Josiah Gan, 40, said the force of a big dog’s bite can break a bone “whereas a small dog’s bite is not enough to hurt a person beyond minor bleeding of the skin”.

Having said that, certain breeds of small dogs are known to be less docile than others, said Dr Chee, who was herself bitten by a neighbour’s Jack Russell recently. “These are typically highenergy dogs which are built to be territorial and bark excessively,” she said.

In many countries, Jack Russells are bred in farms to hunt rodents and pests. “They need to be constantly active, and can get frustrated if kept indoors too much,” Dr Chee said.

Vets and trainers said small dogs are no less aggressive and may have as high a propensity to bite.

Even if they do not inflict as much damage, it is a good idea that small dogs also attend obedience training, they said.

Singapore German Shepherd Club president Kabir Singh said: “Given that Singapore is a densely populated country with a high degree of interaction between humans and pets, obedience training for all dogs will address and reduce incidents of dog-related injuries.”

the above is just an extract of the report on Monday.

we wrote a little response to the Reporter... 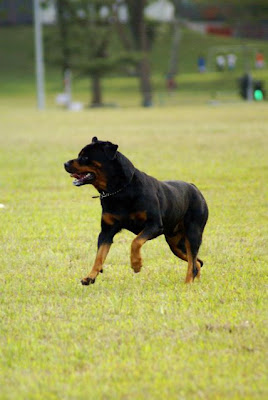 Obedience training is not panadol

Thank you for your invaluable article on dog bites today (22122008) as it highlights the many wrong perceptions people have about big dogs.

Your focus on obedience classes is right, but it doesn't really address the issue of dog ownership. You see, obedience training doesn't actually help all the time. And depending on what you want to do with your dog, a total waste of time.

Let me give you an example. If the dog is to be trained in Search and Rescue (SAR) work, being overly obedient actually hinders the training.

Dogs also bite for two reasons and two reasons only. Fear and training. They either attack to protect their territory, or they are trained to do so. Even dominance can be reasoned as fear from losing it's lead position.

Confident dogs on the other hand, does nothing of this sort.

What is exactly my point here? Dog ownership and education should be very high on the list. Like keeping a child at home for 18 years then expecting him to fend for himself.

Perhaps a visit to bigbrownbearbear.blogspot.com will let you have a clearer view of how a Rottweiler's life in Singapore should be.

There is also a UrbanWire article by Eileen. The link is also found on the site. Please note that the owner of the site only wants to improve the breed's image and has no interest in controversy.

This email serves purely for your own consumption and should you require an expert view of a Rottie owner, and many others that are friends, you are welcome to contact them. 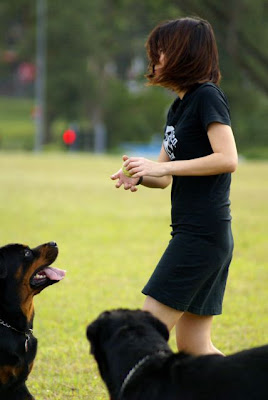 I totally agree with ya. Smaller dogs bite more often because they are very insecure dogs & always try to portray themselves as big dogs because obviously, they are not. So they bite. Not only because of fear aggression. There are many reasons why they do it. And I also agree that OB training will not help to solve the problem. It will only teach the dog commands but the dog will remain the same. Maybe it will calm the dog down a little but it will certainly not eliminate the aggression problem. No way! Dogs must go for rehabilitation & only dog behaviorists & special classes can help. But if the dog is like that, then the dog will always be like that. Even rehabilitation will only cure then dog somewhere from 30% to 50%.

Merry Christmas! Hope you get loads of droolsomely delicious foodies & lots of hugs & kisses too!