Dogs on Buses / A step back for Dogs and Owners 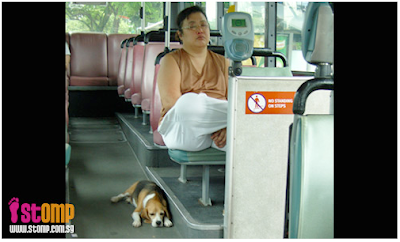 "So inconsiderate," says a bus commuter, who saw this pet owner with her pooch in tow aboard a bus, and when urged by the bus captain and fellow passengers to leave, refused to do so.
Khoh was present and on board the same bus, and related:
"She boarded the bus along Cecil street, opposite the AIG office.
"This happened last saturday (12/07/08) in the afternoon between 1pm to 2 pm."
On the woman's behaviour, Khoh had this to say:
"She is very inconsiderate and did not consider the fact that some people cannot come into contact with dogs.
"All the passengers were held up for over 10 minutes while waiting for the bus captain to settle this issue - and she still refused to alight even after all the passengers urged her to do so."

Why? Do you only love your own dog? Why didn't you invest in at LEAST a pet carrier and have allow fewer things for other people to say? There isn't even any leash.

As it is, us dogs have a bad enough time in Singapore. Foreign Workers eat strays to reduce food cost, Many places are already out-of-bounds to us. If you really need to take the public transport, at least do it discreetly.

This sort of IN-YOUR-FACE mentality would only serve to have the authorities to impose more powers to people no business having them in the first place. 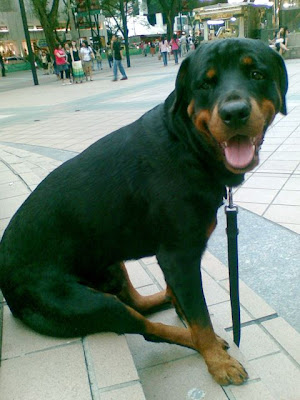 Bruno and me here are sitting outside Taka on the steps. Bruno fancies himself rather like a human, so he plops his butt down on the steps like everyone else around him. True that Pa drives a small car to get us around even town. We'll probably not be able to go to as many places as we do if we didn't have a private car to go about.

But this is Singapore. Until the day everyone is truly able to understand one another, us doggies will have to contend with our lot in life... as little as it is already.
at 3:55 PM

In every situation, it takes two hands to clap.

If the authorities were more lenient with animals in public transport (of course with rules and regulations such as having animals leashed or in carriers), pet owners will have a better idea of the proper way to transport animals. (Not every pet owner can afford to upkeep a car in sg. On top of it, transport companies that specialises in providing such companies come at a high price too.)

If the public is more receptive to the idea of having animals around in public and/or public transport, owners will not bring their pets out in such discreet, it seem as though they are committing heinous crimes. (I believe the lady might have acted in 'defiance'.)

If the lady (featured in Stomp) had been more considerate, there will less controversy now, thus making it more difficult for pets and their owners to be 'accepted' by the mass public, since such acts will reflect badly on us.

Sighs. If only everyone will take a step backwards and be more compromising towards each other. If only .....

Of course Bear remembers you.

I was supersupersuper saddened when I was reading Asian Geographic. They had this article on how some of the Asians prepare dog meat.

Unfortunately, dog as meat for some is a normal meal. We can only hope to educate.

yes i could not agree more! It's all these irresponsible owners that gave our dogs lesser places to go.. and there's already not many places for them to begin with.. sigh!