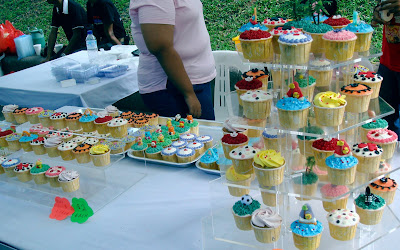 I went to the Arts Bazaar about a week back and they had really funny things on sale! Aren't these really cute?

CUP CAKES! in all manner of colors and themes. Pa lost the name card I think...Too Bad...they even have different flavors inside.

Pa also bought Moss Ball Plants from 2 very cute partners, Irene and Tamako. He hasn't taken any pictures of his Shot Glass Moss Balls...but he will soon, and he will post it up here.

Tamako was especially cute with her queries... rather inappropriate in a way, cause the Moss Plants were placed in Old Drink can tops... Shot Glasses etc. And she wondered aloud why people had so much interest in them... Pa has to set her straight by explaining to her that the concept of having a living thing contrast to the inanimate can juxtaposes to an office table in which the size is appropriate.

Pa could see the other partner being not too pleased about the questions especially when comments like "looking like rubbish" was uttered.

But honestly, Pa could see her point, and anyway they were both kinda cute. Even their email is cute... fluffygal23@hotmail.com. Pictures up later! (Pa has her HP number, but dunch think it would be a good idea to post it here... 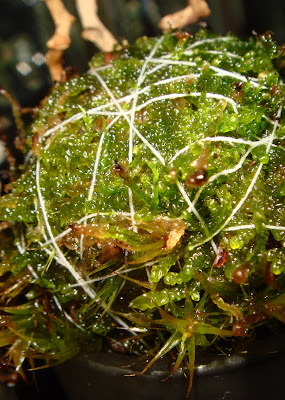 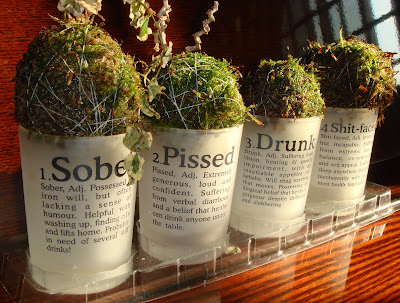 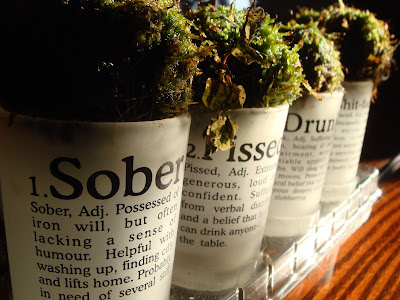 One question you could ask is where was I?

OUTSIDE. Apparently one of the organisers who identified himself as a Nparks guy came over to Pa when he was outside... and told Pa to remove me from the area.

Nparks Guy: "Hi, I'm from NParks."
Pa: "Hi." (looking at stuff displayed outside.)
NParks Guy: "Could you remove your dog?"
Pa: "What? *looks around* Dogs not allowed here?"
NParks Guy: "Err...no. they are allowed. But people might be uncomfortable."
Pa: "*looking at 3 girls petting me* I'm outside the building and I dun plan to step inside."
NParks Guy: "Yah. Maybe you can just move your dog all the way over that side."
Pa: "*getting pissed* whatever." (Walks on ignoring Nparks guy with a wave of the hand that says 'bah.'

The security guard was so happy to see me again and he kept on petting me. He even brought me to walk about as Pa went inside to take a look and met te Moss Ball girls. NParks guy just sat in the corner. I dunch think he likes dogs. Or maybe its just me. *sob*

Just as Pa was walking off....he heard his name called outside! IT WAS JENNY!!! Bailey's mom! I was so happy to see her that I gave her a very good face bath and shed my fur on her. Actually its a coded message to Baileys when she gets home. Yes...Humans can be made used of like that. 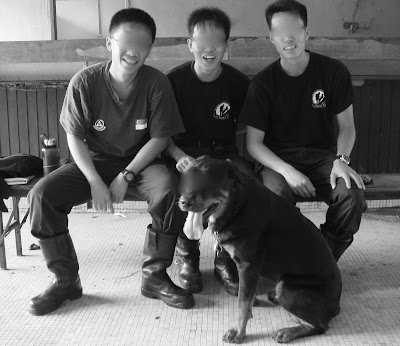 I've decided to post up a picture of my uber secret training with my uber solid trainers. But to protect everyone's identities, I have blocked off all our eyes to protect all our uber secret identities
at 10:21 AM

So how's your training soo afr? Becoming a fierce Rottie already? Can bite the padded arm pillow? Bite HARD yer!!! Wahahaha! I want to see some broken bones... lol! I'm just kidding... By the way, why you cover your eyes too?

Because its a uber secret identity. So everyone must be disguised

Hey, secret dog!
You have been tagged in the Seven Random Things game by Kevin the Collie. Want to Play?